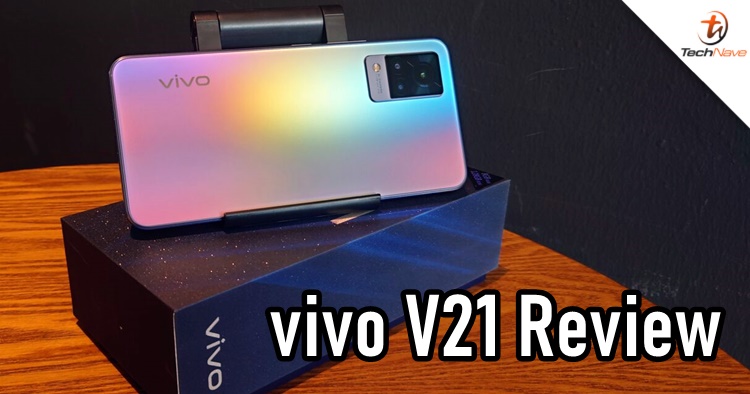 Ah...the vivo V series has sure come a long way. If you're familiar with this smartphone series, you'll notice it tends to skip even numbers. This is why there's no vivo v18. However, they stopped doing that, with the last three models being the V19, V20, and the new V21. Like its predecessors, the V21 is a mid-range phone heavily marketed as a selfie snapper.

So what does it have? For starters, it has a front-facing 44MP sensor. It sounds like overkill, but that doesn't mean it's just a selfie phone. RM1599 for it may sound like a decent deal but if you're not sure about it, read on below for our review on the vivo V21.

Compared with its predecessor, there isn't much to say about the vivo V21 because it's essentially the same. Nonetheless, it's still visually appealing, smooth, and elegant. You'd be surprised to know that the back body doesn't attract many fingerprints, and the grip is quite good. 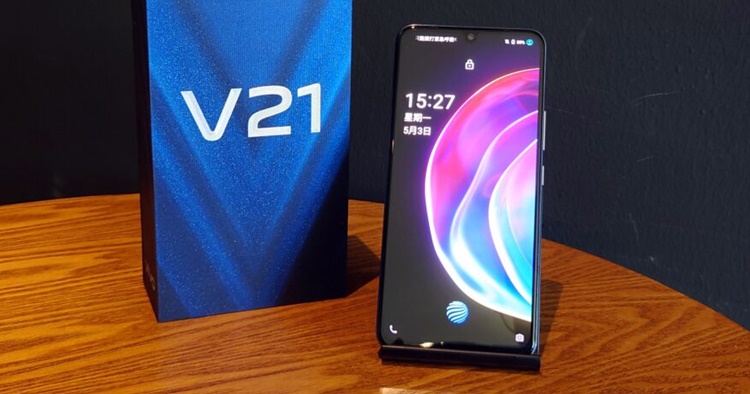 The V21 in the flesh, nothing too special about the front 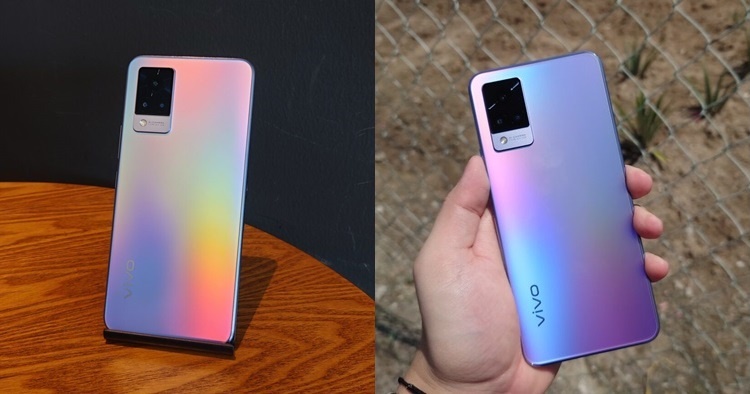 But on the back, it's a chameleon that changes colours 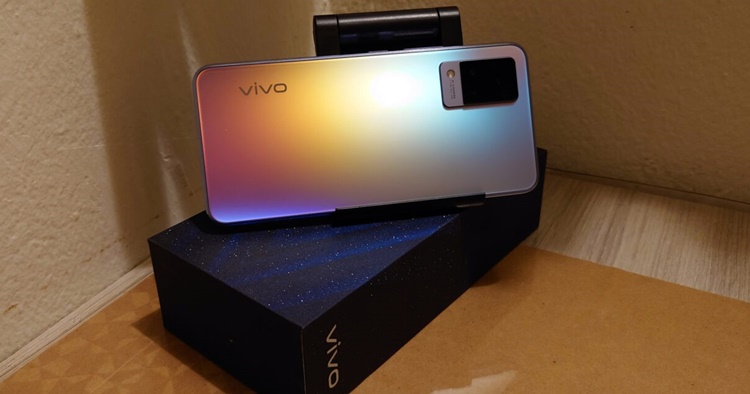 The colours never stay the same 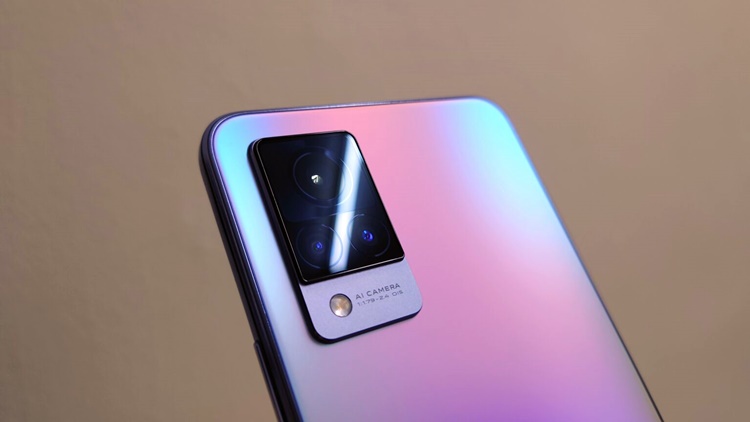 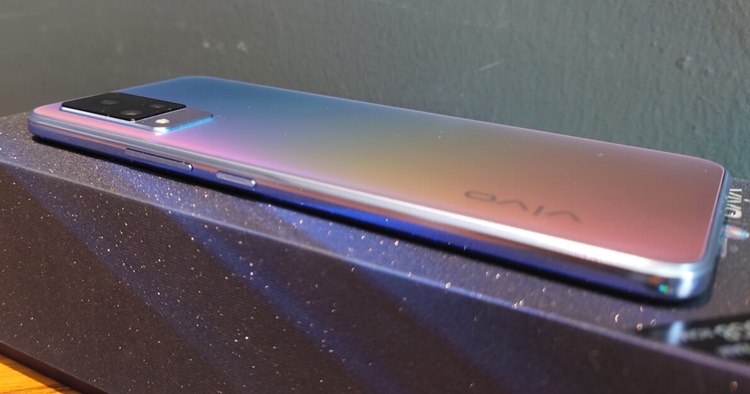 The volume and power button, there's nothing on the other side For this model, you can choose either the Sunset Dazzle or Dusk Blue colour. If you ask us, the former looks much better. When you shine a light on it, it will change colours depending on the angle you view it from. You might even mistake it for another phone if you put it on the table because of how much the colour changes. It's almost like a chameleon!

Tech specs and features - An arsenal of camera functions

Here is the official tech specs list of the vivo V21:

As you can see from the list above, everything about this phone is pretty standard for a mid-range device. But hold on, what is that extended RAM all about? According to vivo, this technology can "tap on" an extra 3GB of internal storage for more RAM. This is the same as the virtual memory you'd find on Windows PCs. Virtual memory can be handy, as it allows the V21 to run more apps smoothly.

Does the extended 3GB RAM make a difference? If we are being honest, it's hard to tell the difference, but that could be because it's doing the job well. To enable it, you will first have to go into the phone's settings. Look for "RAM and storage space", then go to RAM and tap on the Extended RAM. Once enabled, all inactive apps in the background will be placed in the extended RAM.

There's another feature that doesn't seem to show any noticeable difference - refresh rate. The vivo V21 features 90Hz and 60Hz refresh rates. But the only obvious thing is that the power consumption on the latter is higher. You'll also notice that its hybrid dual SIM card slot supports a microSD card. If you're a dual-SIM user and need a microSD card, you will have to sacrifice one of them.

The V21's main highlight (literally) is the 44MP selfie snapper. To our knowledge, it's the only phone that has an OIS for the front camera. It also comes with the Dual Selfie Spotlight, Spotlight Selfie Video, and Super Night Selfie modes. Heck, it can even record a 4K selfie video with the Ultra-Stable Video feature. This just screams perfect for any influencer or anyone who loves to take selfies. We'll touch more on the performance of the cameras later. 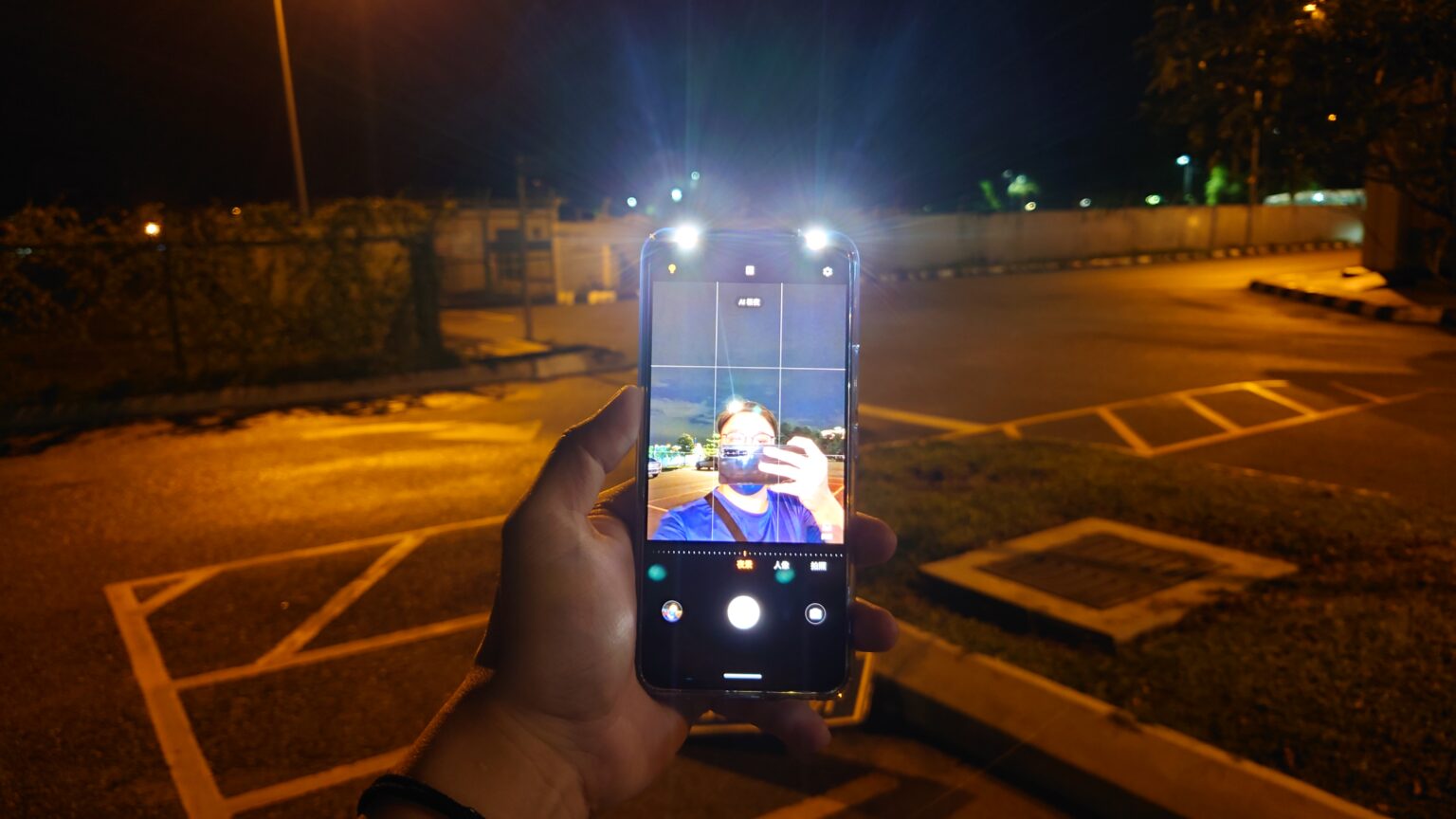 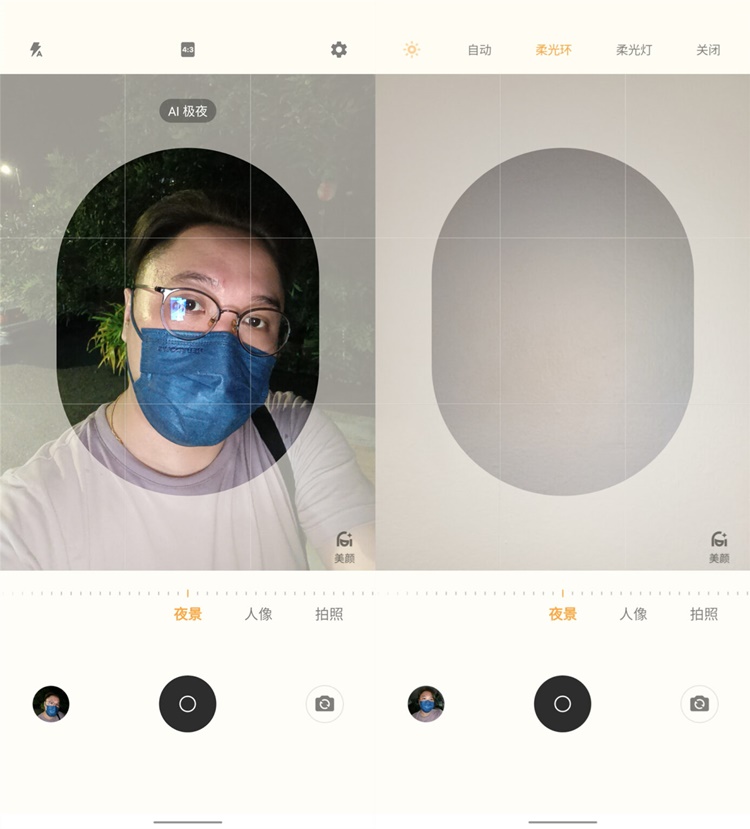 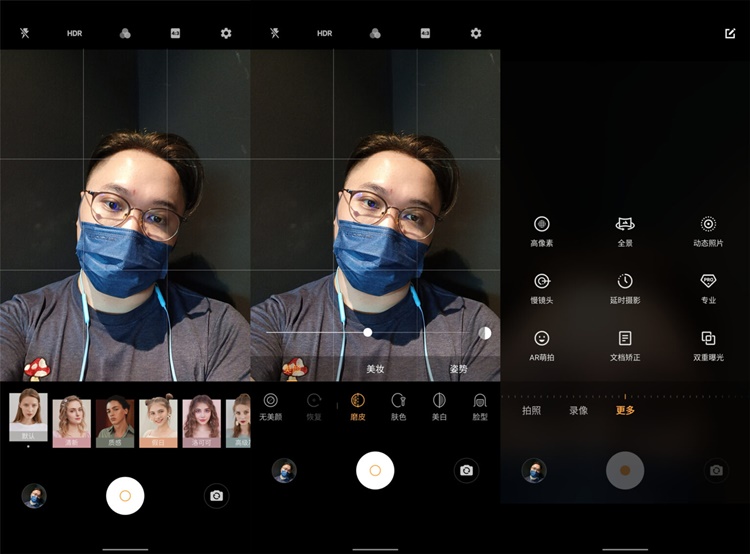 The camera user interface has loads of options 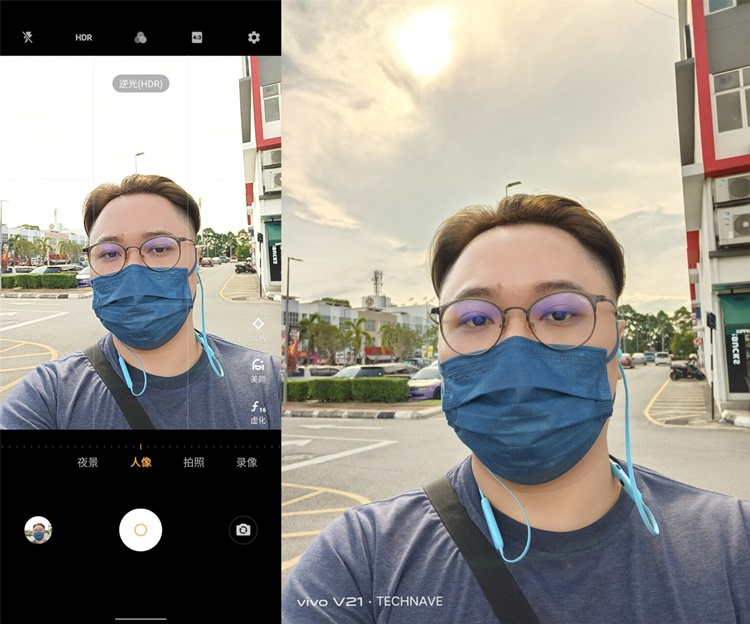 You can turn on HDR mode to avoid backlight exposure 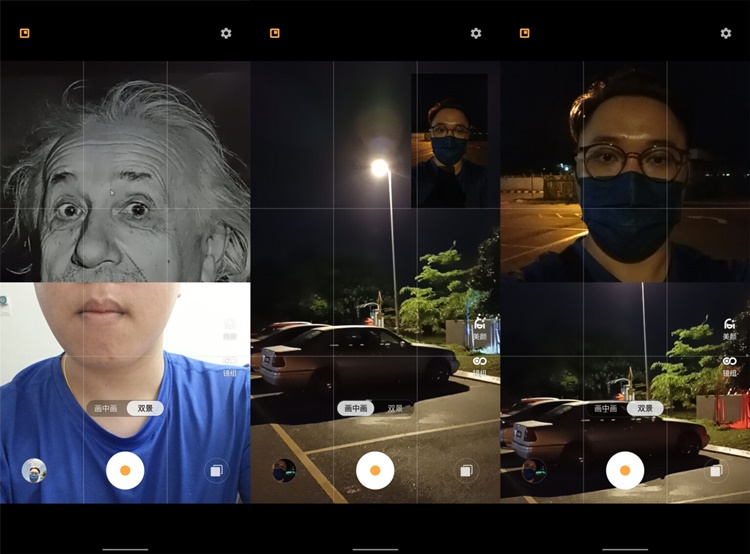 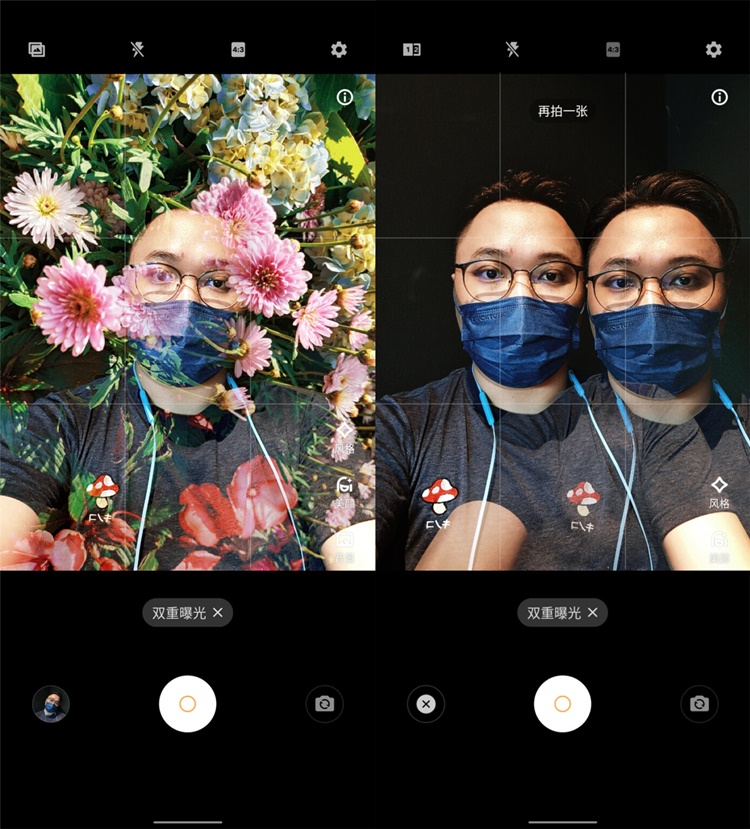 You can play around with the camera's exposure settings 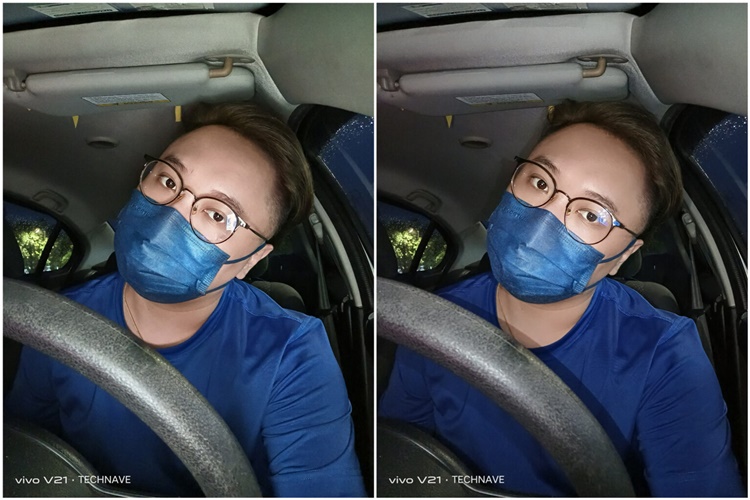 Performance - Conqueror of the night

The vivo V21 may have 3GB of extended RAM, but don't expect it to boost performance by much. The Dimensity 800U chipset performed well enough on Geekbench 5, scoring 571 points and 1692 points for single-core and multi-core. It also scored 1595 points on 3D Mark, which puts it on an average level with current phones.

Synthetic benchmarks aren't everything, of course. While the scores don't look all that impressive, the V21 can still run Genshin Impact quite nicely. It doesn't get warm until 30 minutes later either, which is a good sign. On top of that, the graphics on the AMOLED display is a sight to behold. The phone also has a gaming centre app, but the only new feature that it has is a so-called 4D game vibration, which only supports PUBG at the moment. 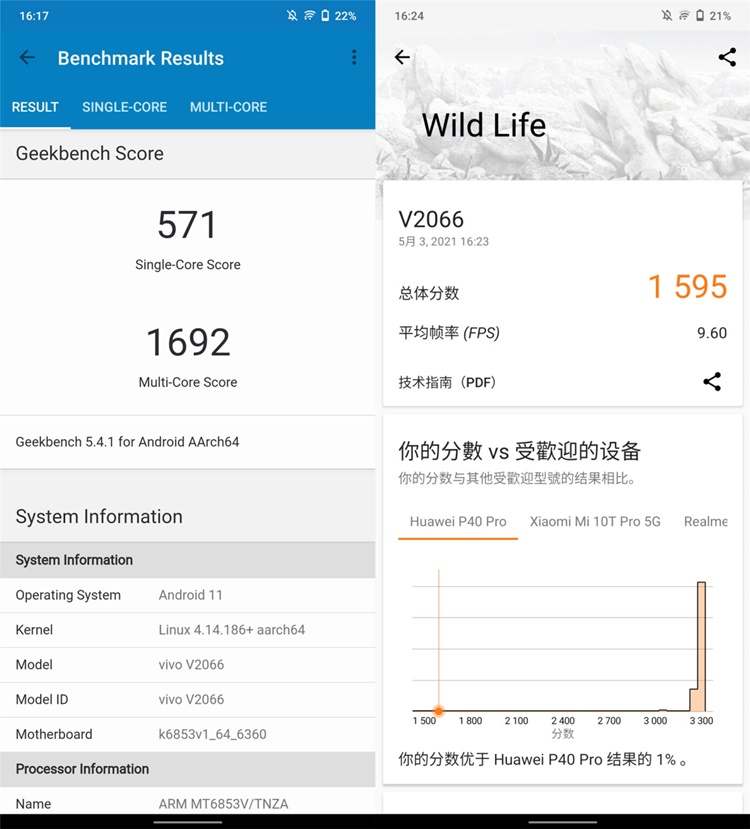 It only takes an hour to fully recharge the phone

The V21's battery life is generally quite good when you don't play many mobile games or taking photography. Although the 90Hz refresh rate mode can really drain the battery, the phone is blessed with a 33W FlashCharge charger. This allows you to charge the phone from 5% to 57% in 30 minutes which is super fast. After that, it's just another 30 minutes before the phone is completely recharged. This gets a thumb's up in our book.

Let's talk about the camera performance next. The V21's triple rear camera is better than we expected, especially for night photography. Pictures turn out quite stunning, and the colour contrast is generally impressive. You might see some noise in some shots. But all you need to do is turn on the night mode to reduce the noise and greatly enhance your photos. Anyway, we'll let the pictures speak for themselves. 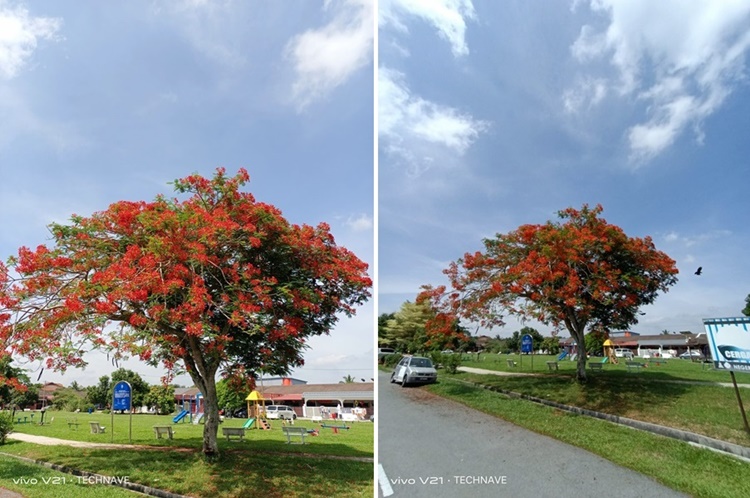 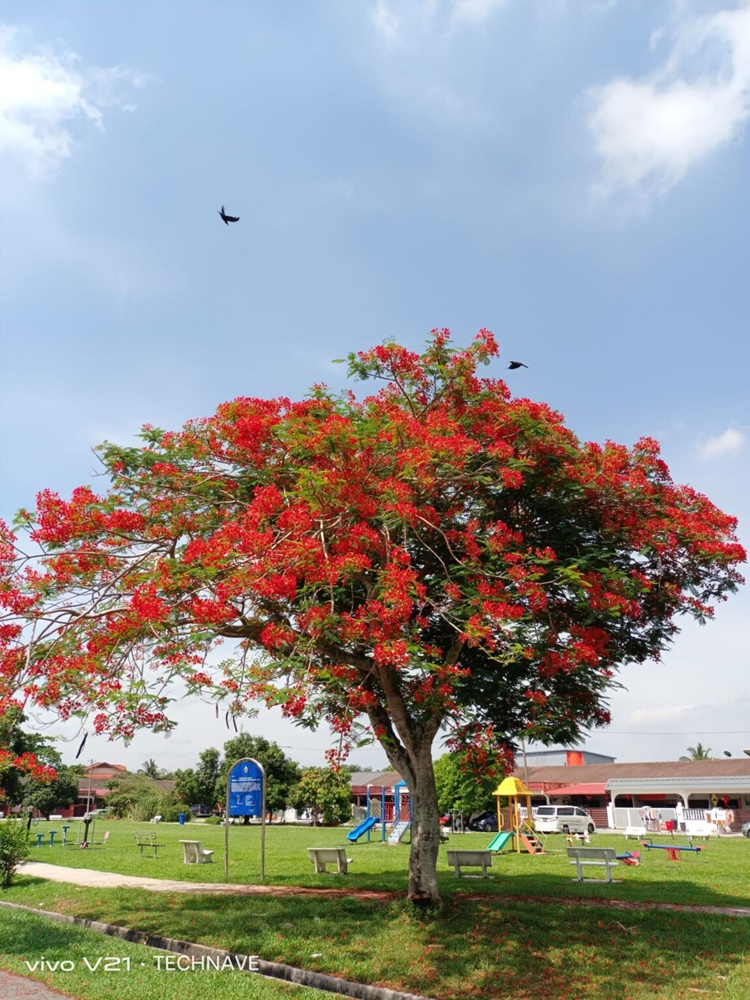 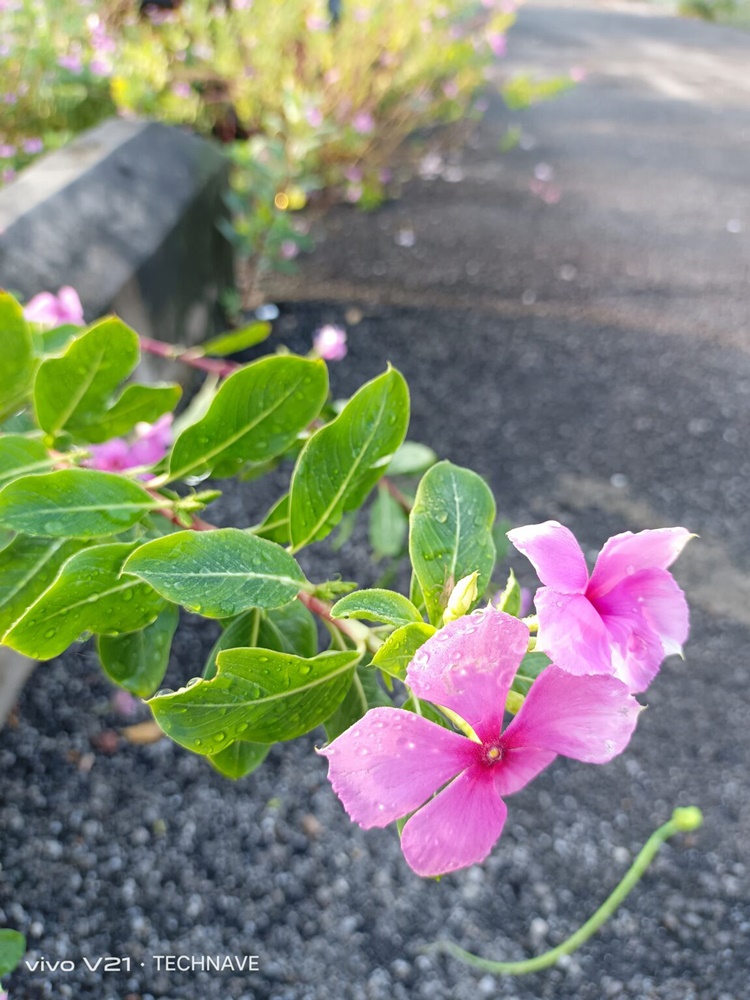 The macro mode is quite impressive 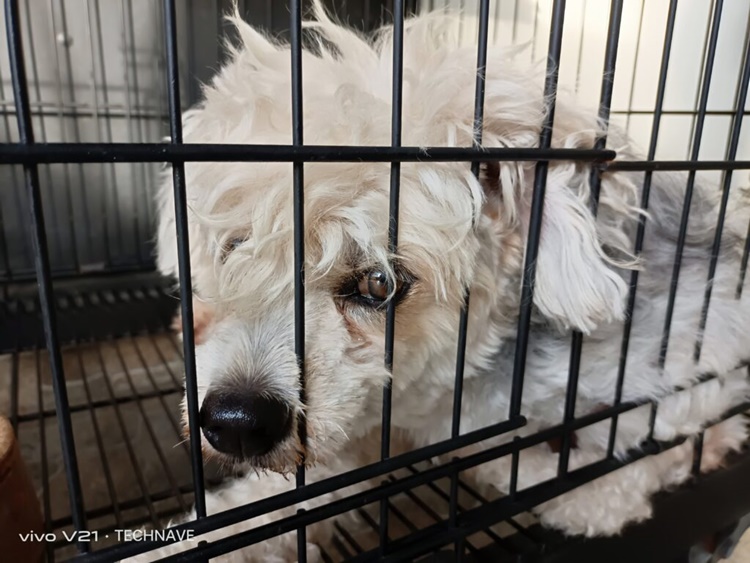 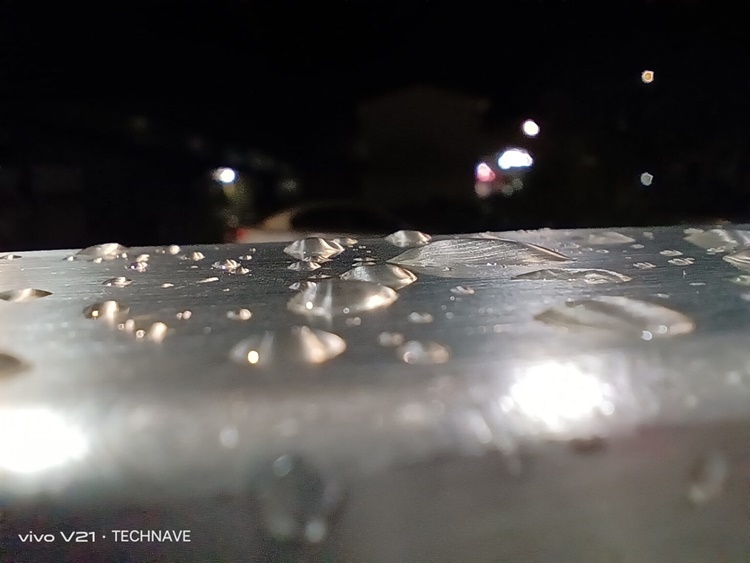 Another photo in macro mode 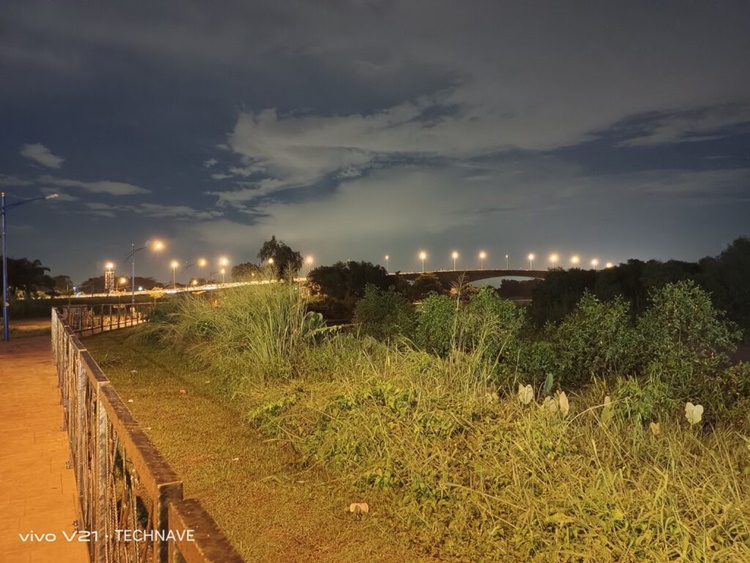 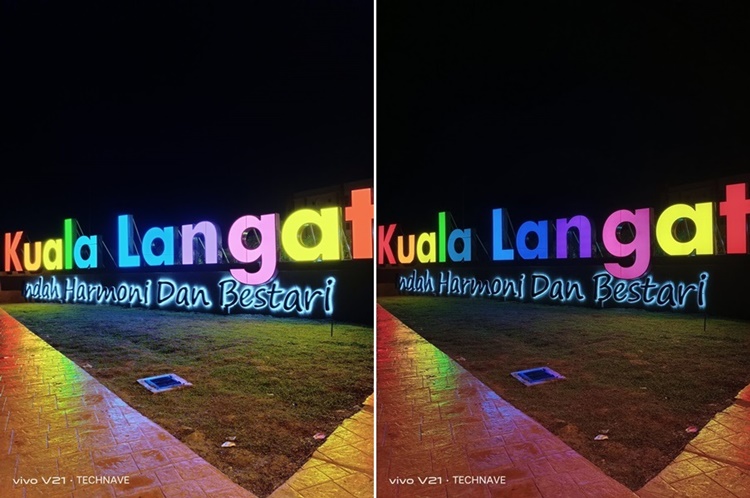 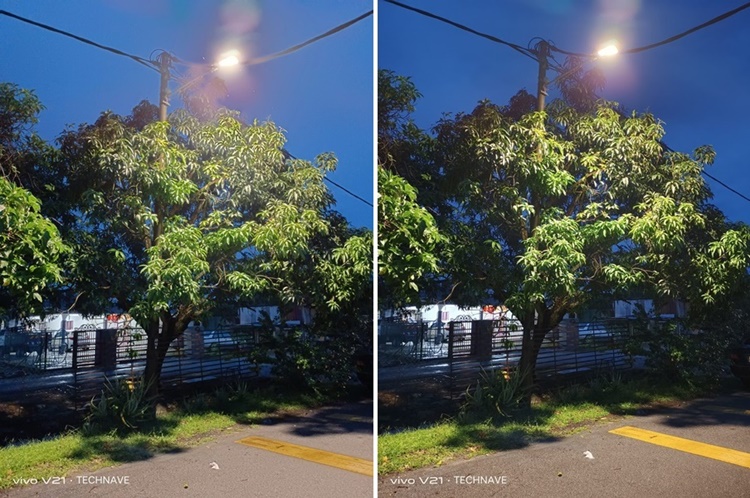 Before and after using night mode - Scenario no.2

By now, it should be obvious that the vivo V21 is excellent for those who do daily vlogs like TikTok and Instagram stories. More people are beginning to upload short clips during the pandemic, so vivo really nailed it with the target demographic this time. As mentioned above, the main highlight about the V21 is its 44MP OIS front camera and 64MP triple rear camera module.

But what do you think of the vivo V21? Let us know in the comments below, and stay tuned for more tech gadget reviews at TechNave.com.