f 6GB of RAM, new BOE OLED displays and more could be featured on the iPhone 12 series | TechNave

Current Location: Home > News > 6GB of RAM, new BOE OLED displays and more could be featured on the iPhone 12 series

6GB of RAM, new BOE OLED displays and more could be featured on the iPhone 12 series 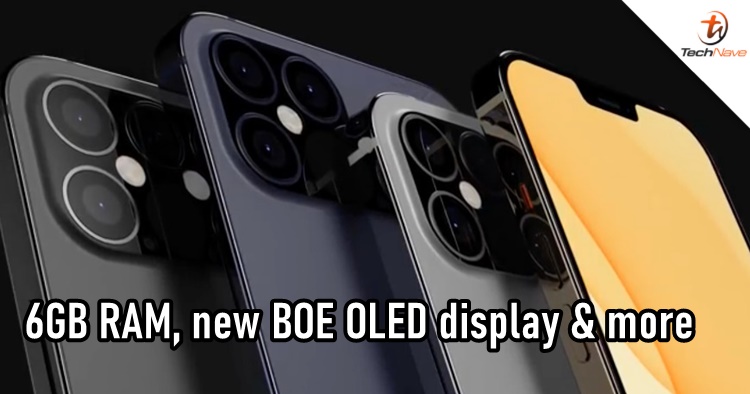 Today, @AppleInsider just reported some new juicy iPhone 12 series rumours on Twitter. According to the source, it is reported that the iPhone 12 Pro and 12 Pro Max could sport 6GB of RAM and a bunch of other tech specs revealed below. 6GB is a normal number figure on Android, but let's not forget it operates differently on iOS.

To back up that rumour, other notable leaksters like @jon_prosser and @L0vetodream are also supporting the fact that the pro variants are getting the 6GB of RAM. Besides the possibility of having an iPhone 12 Pro and 12 Pro Max, Apple could also be releasing an iPhone 12 and 12 Max variant. This news is tallying with the previous rumours of the company going into a new direction and should this be true, we are speculating that perhaps we won't see an iPhone SE 3 because of the iPhone 12. On the other hand, @AppleInsider also made a table spec leak of all the four iPhones. The ones that caught our attention is the BOE OLED Super Retina display and in case you're wondering, BOE is a Chinese electronic company that manufactures LCD, OLED and flexible displays. It's also noted that there won't be a 64GB storage option anymore, as well as bringing over a LiDAR sensor (usually seen on the iPad Pro) to the pro variants.

In terms of price, it could very well start at $649 (~RM2773) and up to $1399 (~RM5978). Since all these are speculations, we suggest you take this news with a grain of salt and wait until the official news in September. Stay tuned for more trending tech news at TechNave.com.