In conjunction with ASUS 30th Anniversary at Computex 2019 today, the company revealed a bunch of new VivoBook and Zenbook lineups, besides the exclusive Zenbook Edition 30, there's the ZenBook 13/14/15, and a new ZenBook Pro Duo with an even bigger 14-inch ASUS ScreenPad Plus secondary touchscreen. So we will be talking about that here.

As a secondary touchscreen, this allows content creators to be more flexible and more productive for easy multitasking and it integrates with the primary display. To accommodate this new feature, the company had put in a ScreenXpert software for the user to utilize the apps, tools and utility benefits. In case you're wondering, the primary display is of OLED and runs up to 4K UHD (3840 x 2160), while the secondary touchscreen goes up to 4K (3840 x 1100) resolution. The ASUS NumberPad dual-function touchpad is also present. The resolution isn't the only thing that's high up, the tech specs inside are powered by up to 9th Generation Intel Core processors, combined with up to 32GB RAM and an NVIDIA GeForce RTX 2060 GPU, with ultrafast storage provided by up to a 1TB PCIe 3.0 x4 SSD. This belongs to the UX581 model, whereas the UX481 model is powered up to an Intel Core i7 processor and a GeForce MX250 GPU, a 14-inch NanoEdge FHD display, an FHD ScreenPad Plus and more.

As for the ZenBook 13 (UX334), ZenBook 14 (UX434) and ZenBook 15 (UX534) laptops, they too also feature a bigger 5.65-inch ASUS ScreenPad 2.0 just like the previous model but better. The four-sided frameless NanoEdge display is still there with up to 95% screen-to-body ratio, accompanied by up to 8th Generation Intel Core i7 quad-core CPUs, up to NVIDIA GeForce GTX 1650 Max-Q graphics, 16GB RAM, ultrafast PCIe SSDs and gigabit-class Wi-Fi 5. 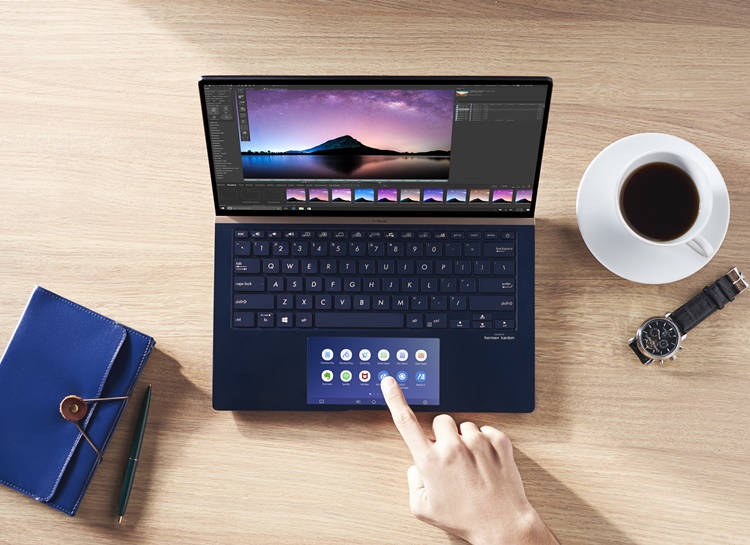 Unfortunately, there was no price tag announced for each laptop mentioned here. But it's said that they will be revealed in the third quarter of 2019 and probably at least one of these laptops might come to Malaysia, so stay tuned for that only at TechNave.com.