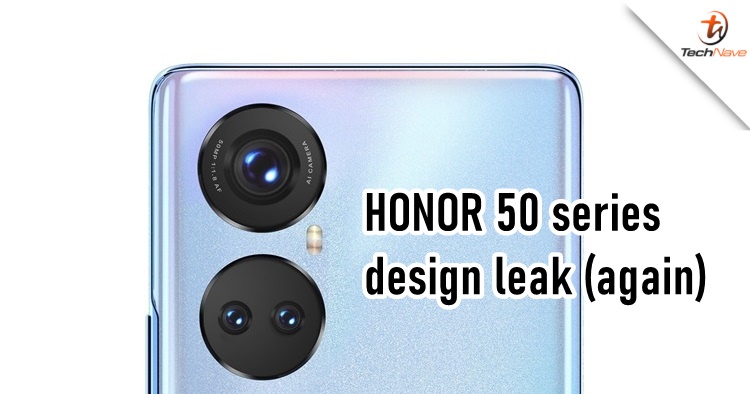 We are less than a week from witnessing the new HONOR 50 series. Scheduled for 16 June 2021, it was only a matter of time that a rendered design would leak online and here we are. In this rendered image, the HONOR 50 series has a different look from previous rumours.

According to GMSArena.com, HONOR is quite likely to reveal the HONOR 50 and HONOR 50 Pro. Both phones have a huge main camera sensor alongside two smaller ones that are unknown at the moment. Rumours have it that the pro variant's main camera is 108MP with an f/1.8 aperture, whereas the standard model could be using a 50MP sensor.

From the looks of it, the two other small cameras don't look like the typical ultrawide nor periscope lens which are popular these days. At best, perhaps it's a telephoto lens and we read that the HONOR 50 series focuses on blogging. Unfortunately, that's all the images we got and we expect to see more of it soon.

In terms of other tech specs, the HONOR 50 series is going to feature a Snapdragon 778G chipset which could fit the standard variant. On the other hand, the pro might have a Snapdragon 888 chipset but do take this news with a pinch of salt. Until then, stay tuned for our official coverage at TechNave.com.