The Xiaomi Mi 11 launch in Malaysia last month is certainly one of the most interesting flagships of 2021 so far. After all, it's got great specs and an affordable price tag. But that's not the end of it because there are more powerful variants like the Mi 11 Pro on the way.

Thanks to a screenshot by Digital Chat Station, we now know that a new Xiaomi device has been certified on China's 3C. According to the leaker, it's a Mi 11 series device with 67W dual-charging. The 'dual' here could be referring to how the phone may come with a dual-battery setup, which would result in a thicker body. It should be noted that the device was also found on TENAA previously and was confirmed to have 67W fast-charging. 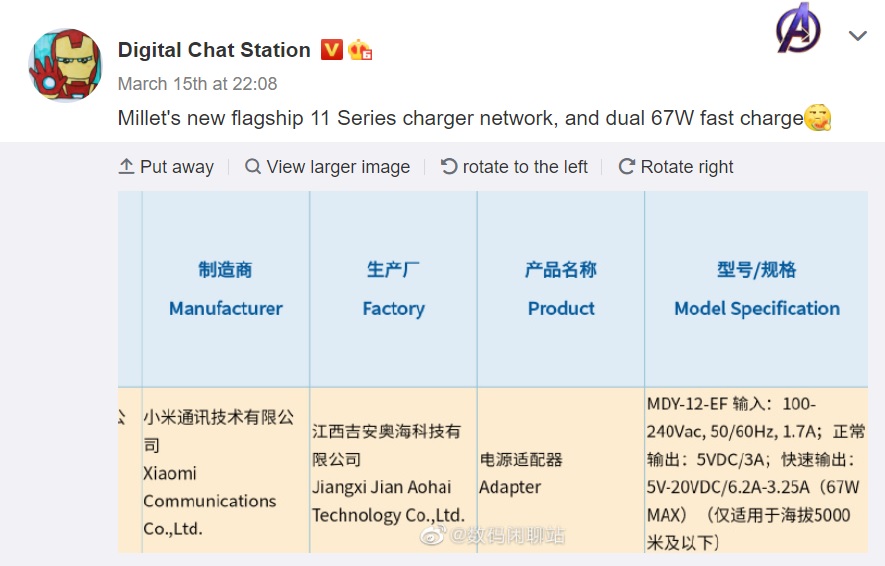 This phone is most likely the Mi 11 Pro, as some have speculated that the Mi 11 Ultra would have 120W fast-charging instead. Interestingly, the 3C listing also says that phone's the charging adapter is suitable for devices with a battery size below 5000mAh. Since the Xiaomi Mi 11's battery capacity is 4600mAh, we can expect the Mi 11 Pro's battery capacity to be between 4600mAh and 5000mAh.

Xiaomi will probably be launching the Mi 11 Pro and Ultra soon. But what kind of features or upgrades would you like to see from these variants? Share your comments below! Also, stay tuned to TechNave for more news about them.