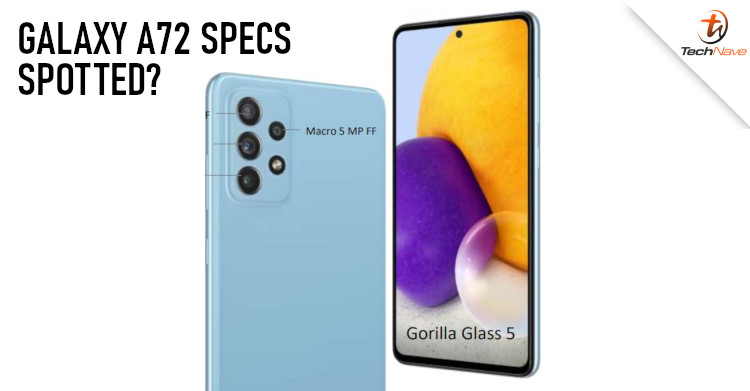 It seems that the full tech specs of the Samsung Galaxy A72 smartphone may have been leaked by Twitter user @Mr_TechTalkTV, giving us a better idea of what to expect when it is officially launched. Unfortunately, there is no news on the Malaysia release date, as well as local pricing, so you might want to check back periodically for more updates.

In terms of the tech specs, it seems that the smartphone in question comes equipped with the Qualcomm Snapdragon 720G chipset, up to 8GB RAM, up to 256GB ROM, 6.7-inch 90Hz Infinity-O FHD+ Super AMOLED display, as well as a 5000mAh internal battery which supports up to 25W fast charging. Camera-wise, it has a 64MP + 12MP + 8MP + 5MP quad-rear camera setup while the front has a single 32MP selfie camera.

Everything about Samsung Galaxy A72 pic.twitter.com/21qMv0stVB

Feature-wise, the phone is capable of achieving up to 3x optical zoom and up to 30x Space Zoom which makes it the first smartphone to support such a feature. While the tech specs shown in the tweet might look genuine, it is best to take some of the information with a grain of salt, due to the fact that Samsung has yet to provide an official statement on the leak.

That all being said, what are your thoughts on the tech specs of the Samsung Galaxy A72? Let us know on our Facebook page and for more updates like this, stay tuned to TechNave.com.