Galaxy Awesome Unpacked event announced, might reveal the Samsung Galaxy A52 and A72 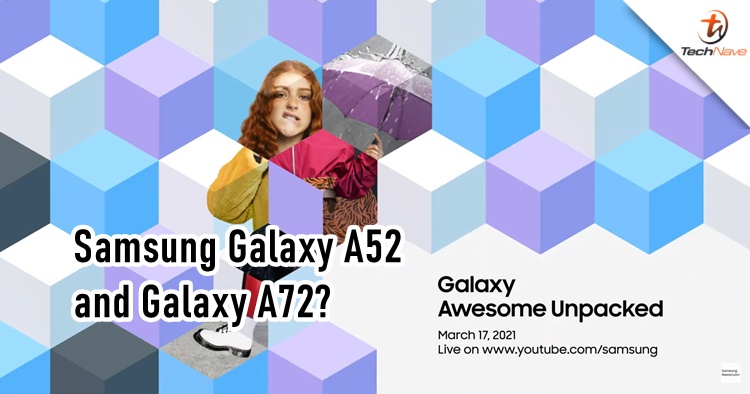 From a few hours ago, Samsung released a new official video teaser about an upcoming livestream event. Titled Galaxy Awesome Unpacked, the teaser didn't reveal much but rumours have it that the Galaxy A52 and Galaxy A72 might be unveiled.

Both the Galaxy A52 and Galaxy A72 have been in the news for quite some time now. For starters, there could be a 4G and 5G variant of the Galaxy A52 featuring a Snapdragon 720G and Snapdragon 750G chipset respectively. Leaks also suggest that both variants will come with 6GB of RAM, a 6.5-inch Super AMOLED display, and a 4500mAh battery. Some regions may even have up to 8GB of RAM.

As for the Galaxy A72, it seems that there isn't an official 4G model. This is very odd as it's using the lower-end Snapdragon 720G chipset. It's rumoured to arrive in two memory variants - 6GB + 128GB and 8GB + 256GB. Other notable tech specs include a 6.7-inch FHD+ display supporting a 90Hz refresh rate, a 5000mAh battery pack, and maybe IP67 water-resistant. There could be a quad rear camera setup too, which consists of 64MP (main) + 12MP (ultrawide) + 8MP (telephoto) + 2MP (macro).

That's all the rumours we know about the two mid-range tier phones for now. We are just a week away from the livestream event so until then, stay tuned for our official news coverage only at TechNave.com.