26th of January is the day the HONOR View20 will be hitting Malaysian markets which is only mere days after its launch in Paris. To celebrate, HONOR will be having their largest roadshow yet at the Ground Floor of High Street in 1 Utama Shopping Center starting from 9.30AM. Early birds will be eligible to receive over RM700 worth of goodies.

If the HONOR View20 doesn’t catch your eye, there are plenty other things happening at the HONOR’s roadshow which will be happening from the 23rd till the 27th of January. The brand new HONOR Magic Watch will be making its debut in the country then. 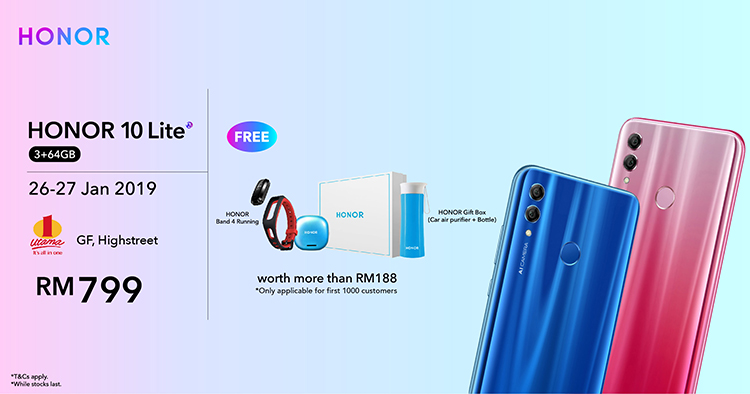 Besides that, the HONOR 10 Lite will be there as well with tech specs of 3GB RAM and 64GB of internal storage in two colours: Shiny Red and Sapphire Blue. The smartphone will retail for RM799. Purchasing this phone comes with free gifts worth over RM188 which includes an HONOR Band 4 Running, a limited edition HONOR water bottle and a free air purifier.

In addition, HONOR’s roadshow is filled with fun activities and games with well known celebrity, Michiyo Ho, a chance to win a limited edition HONOR x Moschino Teddy Bear fragrance, a chance to win a variety of HONOR goodies given out by the HONOR 10 Lite ambassador, Theo Zhu and much more. There are also amazing deals and free gifts for other other smartphones in conjunction with the Chinese New Year like the HONOR View10, HONOR Play, HONOR 8X and etc.

Can’t make it to 1 Utama on those dates, not to worry as HONOR Experience stores will be giving out a HONOR Band 4 for the first 10 people who purchase the HONOR View20 and a a Band 4 Running for the first 10 people who purchase the HONOR 10 Lite. Will you be heading to One Utama to be one of the first in Malaysia to grab the HONOR View20? For more information you can check out their website or official Facebook page and for more HONOR news, make sure to stay tuned to TechNave.com!