Current Location: Home > Reviews > How many movies can you watch before the Samsung Galaxy S20 Ultra 5G's battery runs out?

How many movies can you watch before the Samsung Galaxy S20 Ultra 5G's battery runs out? 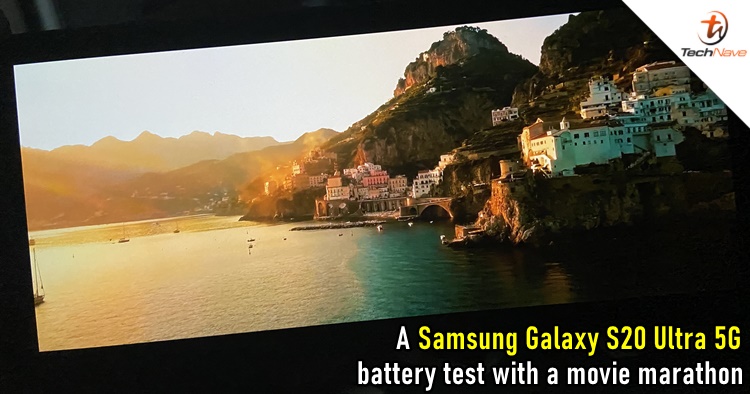 It's a bummer to be a movie fan this year because of the current circumstances. Multiple movies are delayed, our local cinemas are closed until further noticed, and at the very least, we can only catch new movies premiering on Netflix. But then again, having this time given also allows us to catch up on the movies that we missed.

Watching movies on your smartphone may not be the best way, but some people do enjoy being a couch potato doing that. As for me, this period is the perfect time for me to catch up on a few movies I missed and test out the Samsung Galaxy S20 Ultra 5G's battery durability at the same time. With that said - How many movies can you watch before the phone's battery runs out?

In order to test the Galaxy S20 Ultra 5G's battery, I turned on the resolution up to 3200 x 1440 pixels (QHD+) in Vivid mode with max screen brightness. Also, the movies I selected for this marathon are visually high-quality with good contrast (like 1917, Onward, Bloodshot, etc). It's worth mentioning that the battery is 5000mAh so it'd be interesting to see how long it can last. Without further ado, let's get on with it. 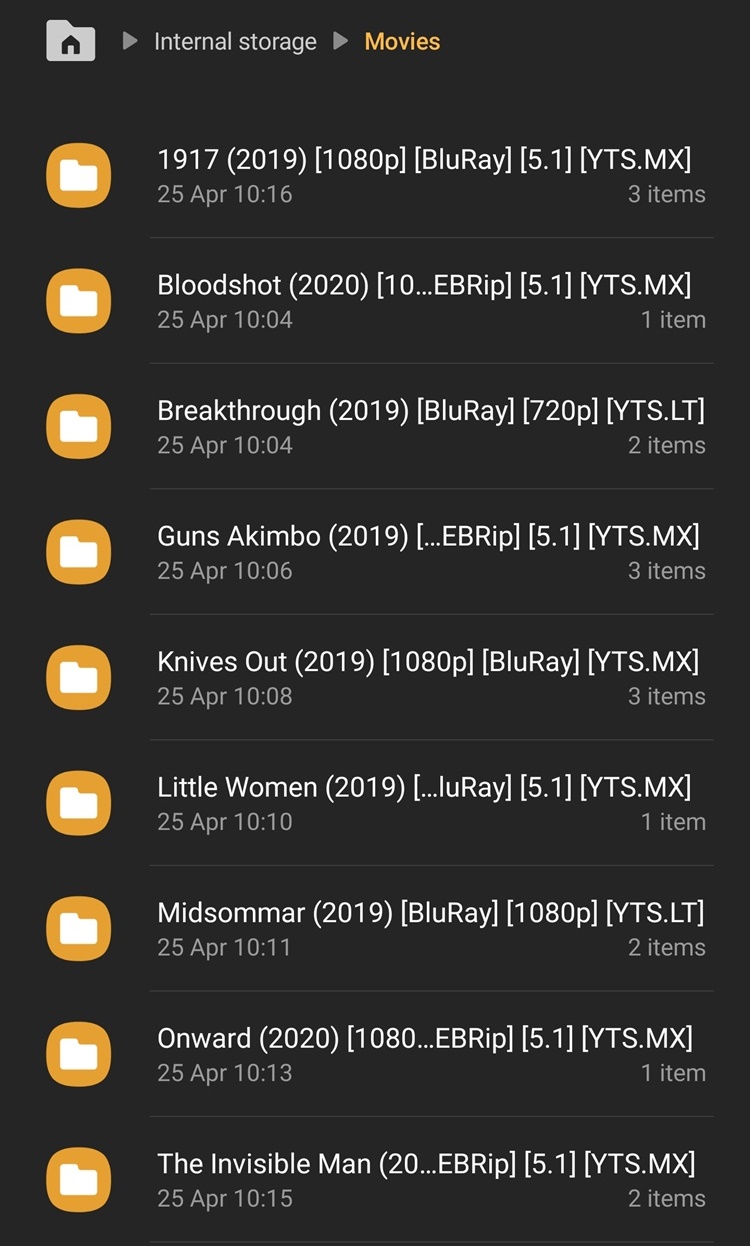 Alright, ready to rock and roll!

The phone was fully charged (well, almost) and I started my movie marathon at 14:13 hours. The first movie I watched was 1917 which has a runtime of 2 hours, and I did multitask some stuff while watching the movie - occasionally turning on the hotspot for a few minutes for my laptop and replying messages. After a duration of two and a half hours, the Galaxy S20 Ultra 5G's battery dropped from 97% to 82%.

What? Just 15%? To be honest, I expected it to drop more than that but ok, it was only the first movie. I then continued on with Bloodshot, which was a more visually striking movie (albeit the storyline was quite boring), then followed by Guns Akimbo and Knives Out as the last movie of the day. So after a total of 9 hours, the battery stopped at 39%. Not bad, huh? 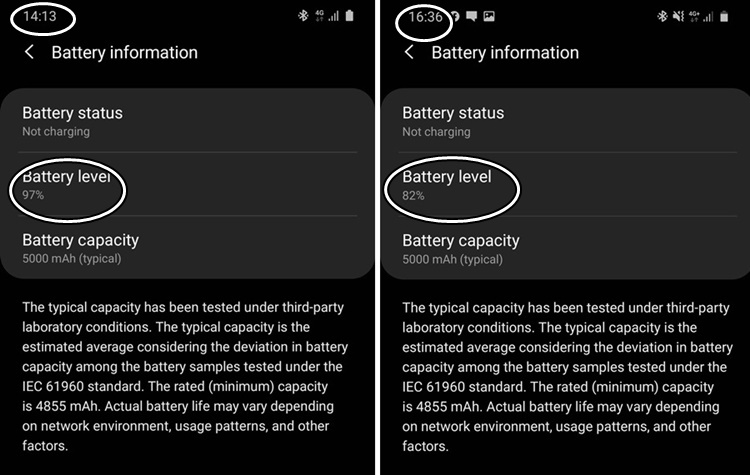 After the first two and a half hours 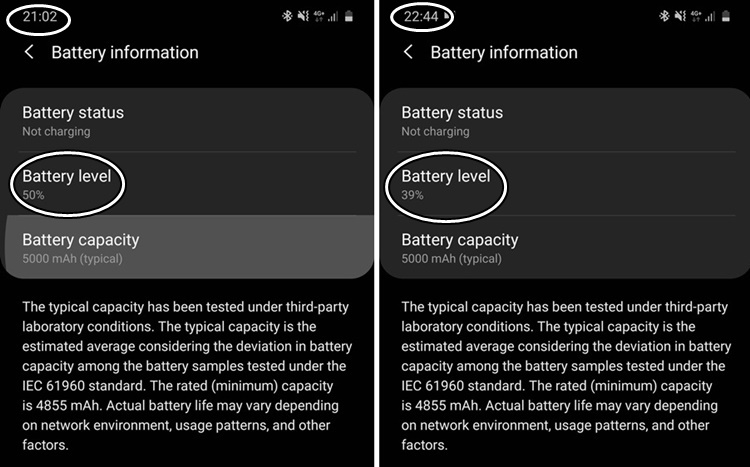 At the end of the day

9 hours of movie marathoning may seem like a rookie number to those hardcore movie fans (guess I'm getting old), but since the phone's battery was at 39% (and it dropped down another 10% for the night), I decided to recharge the phone again up to 50% this time. With just a few movies left, I started watching after lunchtime until the evening.

At the end of the evening, the Galaxy S20 Ultra 5G's battery stopped at 11%. I didn't manage to finish all the movies but with a total time of 6 hours (more or less) combined with some hotspot and social messaging, I think it's not bad that I was able to watch 8 movies in a row. However, I did recharge the phone a bit on the second day so to be realistic, I think it would take 7 movies (with an average of 2 hours each) to watch before the phone's battery runs out completely. 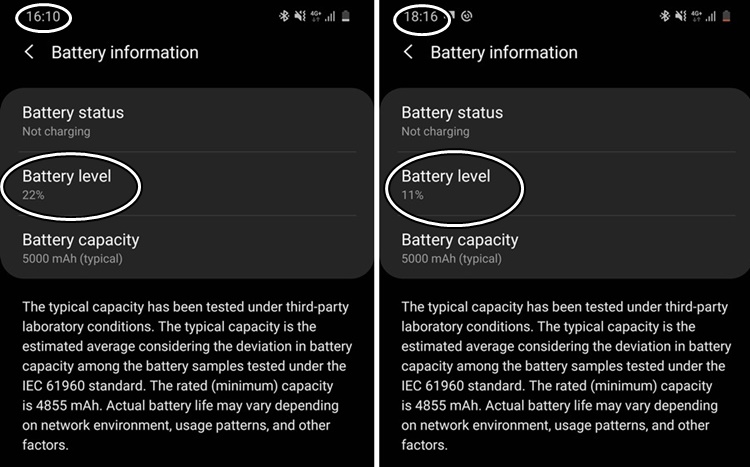 Forgotten to take a screenshot before starting day 2, but anyhow it ended at 11% after around 6 hours of movie-watching time

Closing experience - It felt like a mini cinema device

Before I end this article, I also have some comments from my movie marathon experience on the Galaxy S20 Ultra 5G. Thanks to the QHD+ resolution setting, watching movies on the phone was quite nice. The colour contrast was presented strongly particularly in movies like Onward, Bloodshot, Guns Akimbo, and even Midsommar. For movies like 1917 and The Invisible Man, the dynamic range looked great and because of the 6.9-inch Dynamic AMOLED 2X screen panel, the black areas in several scenes remained truly black without any noises or distortion which was pleasant. 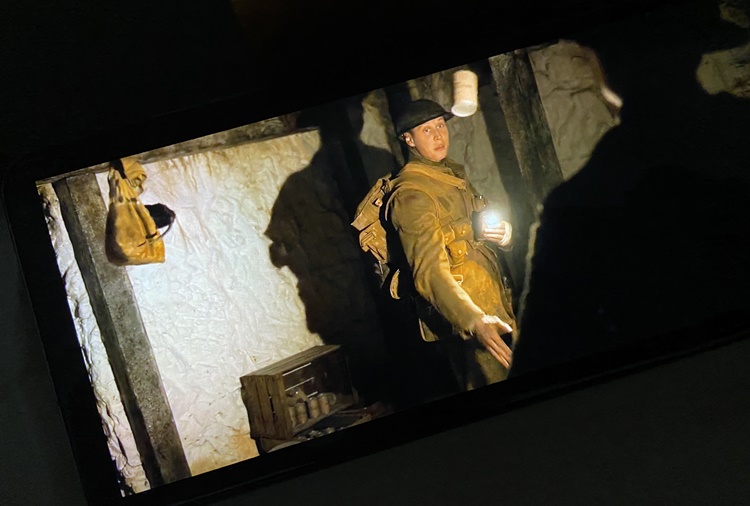 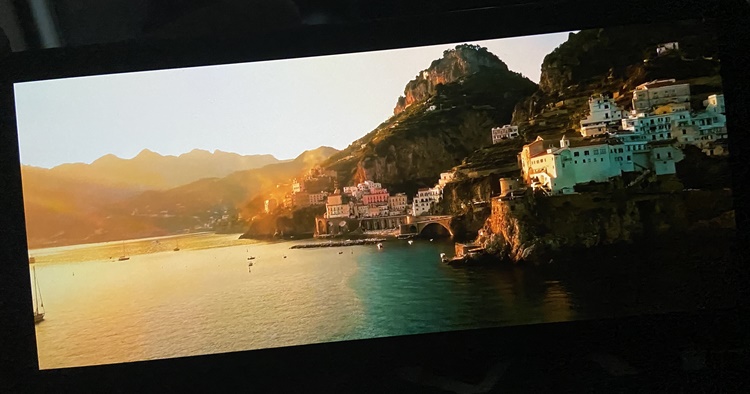 Taking a pic of this doesn't do any justice because you can't exactly screenshot the 6.9-inch Dynamic AMOLED 2X display's quality So this was my experience with the Samsung Galaxy S20 Ultra 5G's battery test. I think if I was testing it with mobile games, it should last me like 5 hours or so since the phone sips around 20% in an hour of mobile gaming. However, for movies, it can easily last you the whole day with 14 hours of entertainment (more or less). A great way to pass time while staying at home, don't you think? Then again, keep in mind that the phone's battery lifespan is different for everyone based on their daily usage.

Usually, if I'm travelling in an aeroplane, I would watch a lot of movies on the phone. So having experienced the Samsung Galaxy S20 Ultra 5G, I can say that this is definitely the best device (so far) to watch movies when travelling long hours. A good 6.9-inch Dynamic AMOLED 2x display and a 5000mAh battery is all that I need for a mobile movie marathon. If you would like to learn more about Samsung's latest flagship, you can visit their official online store.

But what do you think? Do you like to watch your movies and TV series on the phone too? Let us know on our Facebook page and stay tuned for more tech reviews at TechNave.com.