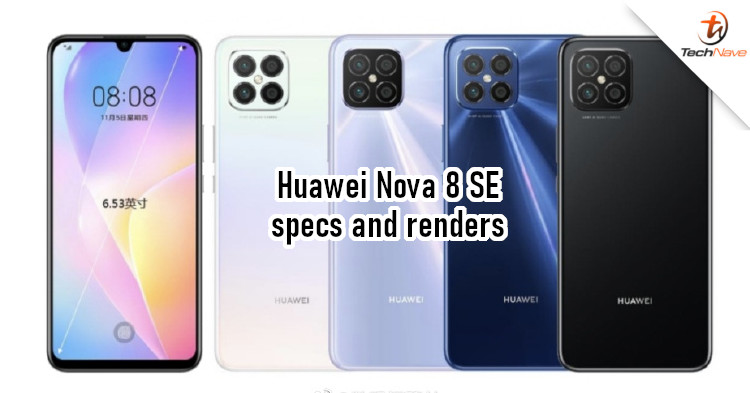 Last week, it was rumoured that Huawei had plans to launch the Nova 8 series soon. It seems that the Nova 8 SE could be included in that launch. Sources have unveiled renders and some specs of the phone earlier today, plus the claim that it will be launched soon.

According to Digital Chat Station, the Huawei Nova 8 SE will be equipped with the Dimensity 720 chipset or Dimensity 800 chipset, suggesting that there's going to be two variants of the device. It's also expected to 6.53-inch Full HD+ 60Hz OLED display, a 3800mAh battery, and support for 66W fast-charging. For cameras, there's going to be a rear quad-camera (64MP+8MP+2MP+2MP) and a single front camera (16MP).

Besides that, the renders of the phone show a design that is different from the Nova 7 SE. Instead of the punch-hole front camera and vertically aligned rear cameras, the Nova 8 SE has a waterdrop notch front camera and the rear quad-camera in a square block. Other than that, it doesn't seem that much has changed.

With that said, what do you think Huawei should improve on (compared to the Nova 7 SE)? Let us know in the comments below and stay tuned to TechNave.com for more news like this.