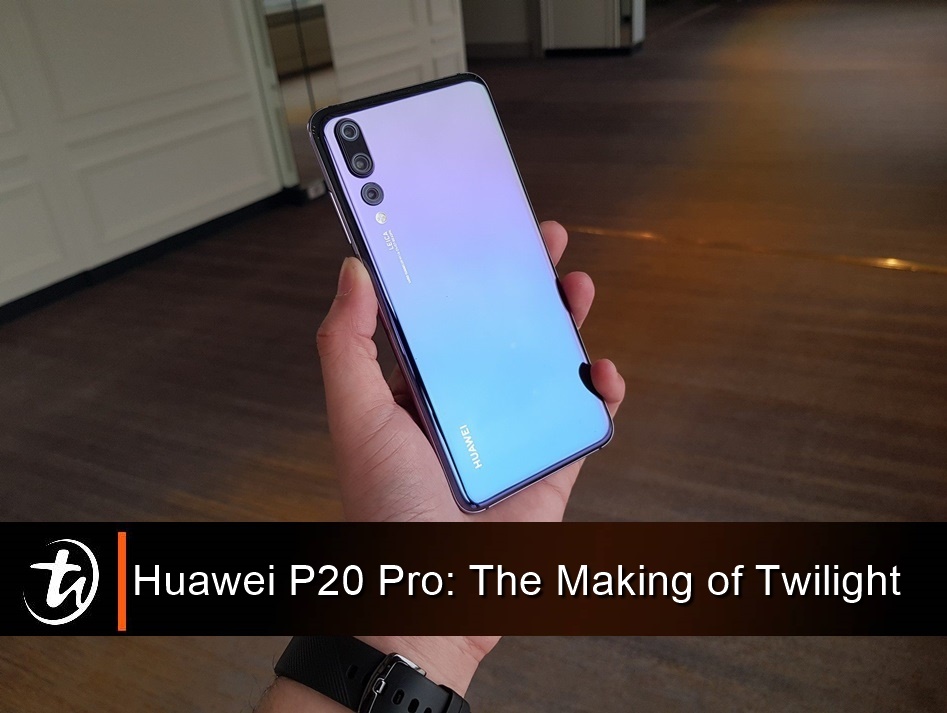 Ever since the Huawei P20 and P20 Pro made their debut, the series was quickly met with positive remarks globally by the consumers and media. It's not just great photography performance alone, but as well as for its design and new colours.

Speaking of colours, smartphone brand manufacturers are really creative when it comes to naming 'flowery' colours for their devices. From a marketing perspective, it works to a certain level but it can be boring when you have repeated colours. For example, Opal Black, Graphite Black, Jet Black, Black Matte and others. But Huawei once again came up with an innovative feature, a colour design that we didn't think was possible - a Twilight variant. Look at the stars, look at how they shine for you~

According to Joon Suh Kim, Huawei Chief Design Officer, how the Twilight variant came to be was inspired by none other than the Northen Lights. It's no doubt that this natural phenomenon is one of the wonders of the world and throughout history, nature has always inspired many great artists and painters, from natural landscapes to towering mountains on paper scrolls in the East with ink wash, also with the West's classic stylistic beauty of nature with the works of Claude Monet and Vincent van Gogh.

“HUAWEI’s designers are not just designers, but dreamers as well. As designers, we get inspirations everywhere; as dreamers, we’re obliged to come up with ideas that the consumers themselves don’t yet know they love, such as the Twilight color.” well said, Joon Suh Kim!

While there are different kinds of colour shades in the Northen Lights, Huawei decided to choose cyan and purple and it sure works wonders as well on the P20 Pro. How the engineers managed to achieve this harmonious look on the flagship was probably not an easy task. Since no one else has done it before, they had to make sure that the colour spectrum will reflect the aurora's magnificence as it's shrunk to the size of a handheld device. On top of that, they have to go through countless body prototypes for the best results so in the end, they settled on a non-conductive vacuum metalizing (NCVM) coating for displaying the best aurora effect.

For this, we have a seal of approval for this cool Twilight design and this applies the same to the Pink Gold variant as well.

Speaking of the overall design, it's not just the colour itself that brings out the charm, the P20 series clearly departs from the P10 series a lot. When the device is held horizontally, it somehow resembles a digital camera because of how they carefully place the cameras. According to Huawei, they use the 20:80 ratio rule when positioning the camera setup behind. If you look at the image, the 20% of the area is strictly only for the camera setup and the Huawei logo, whereas the rest of the 80% space is for the colours to shine.

Continuing on the 80% ratio space, Huawei didn't just slap on the cyan and purple on each side, but it's designed in such a way that we can see a different interpretation of the colour wavelength. As aforementioned earlier, Huawei had thoroughly went through various body materials for the best effect, which they eventually settled on the NCVM coating, which makes the purple spectrum the most natural and expressive whenever a light shines on it. And as an added bonus, turns out the design is comfortable to hold too. From our experience, probably one of the best things about the phone is that fingerprint smudges aren't that annoying whenever you hold it because of the aforementioned NCVM coating. Moreover, the phone size is just right despite the 6.1-inch display, the camera bump isn't much of an issue too because of the Twilight colour and of course, you will get plenty of attention from the people eyeing you your phone.

The Twilight variant is coming to Malaysia!

Although we were kind of disappointed that there's no Twilight variant in Malaysia at the moment, we have news that Huawei Malaysia will be bringing in limited quantities of it on 4 May 2018 at 6 PM, which will be held in Huawei's flagship experience store at Pavilion Elite shopping mall, so get excited for that!! To see the full specifications of the P20 series, you can check out our official P20 series coverage launch in Malaysia right here. Stay tuned for more Huawei news at TechNave.com.