Just a few hours ago, our favourite Twitter leaker, @evleaks has discovered that the Huawei Singapore page has leaked the official launching sales date of the Huawei P30 Series. Obviously, the page has already been taken down but thanks to the wonders of web archiving and referencing from our neighbouring country, we have taken down a few juicy notes of what Malaysians may potentially be getting from Huawei Malaysia as well.

According to the erased page, there will be a P30 Series roadshow on 6 April 2019 in VIVOCITY, Singapore (Central Court) from 10 AM - 10 PM. Customers who are looking forward to purchasing either the P30 or P30 Pro will bring home a free Huawei Watch GT Active edition and a JBL Clip 2 Bluetooth Speaker (while stocks last). No price was mentioned, though, and the pre-order will be made through Singapore's respective telco companies. 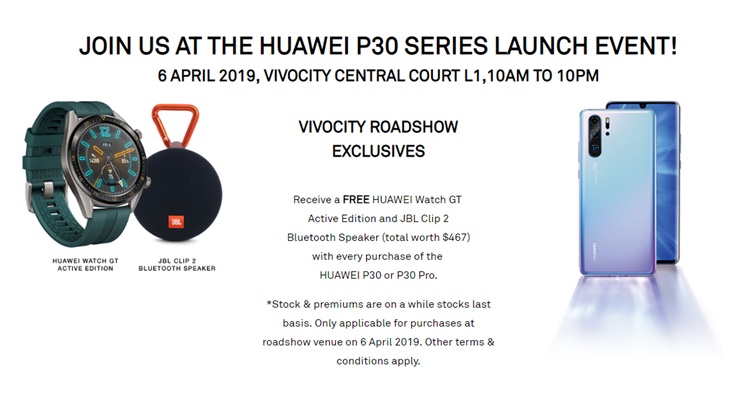 Hmm, will Malaysia also get these goodies? 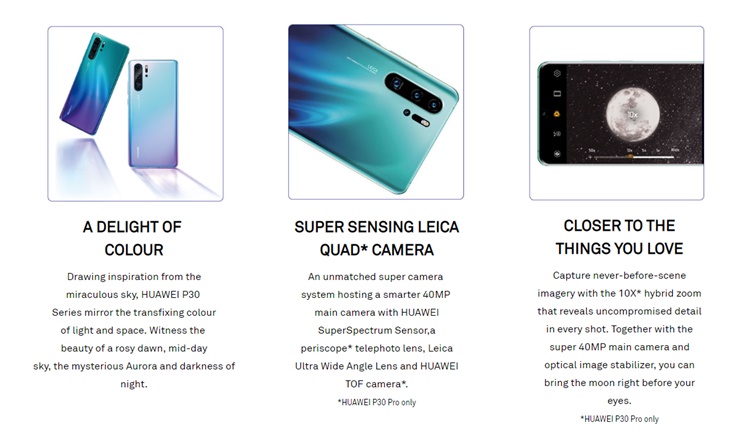 If you look closely at the moon photo, it says it can go up to 50x with digital zoom 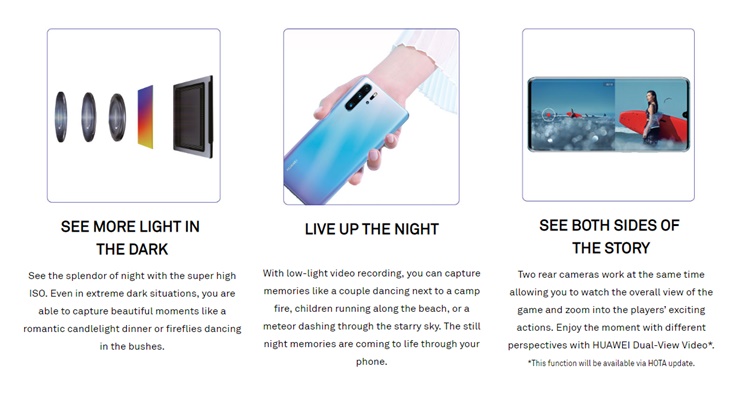 In addition to that, there's also a new high ISO (supposedly up to 409600), a low light video recording and a new Dual-View video that allows the primary and ultra wide-angle lens to record at the same time

Besides that, the page also revealed some interesting tech specs and features that matched previous leaks. The P30 Pro will be equipping the same 40MP primary sensor on one of the triple camera configurations, along with a 20MP ultra wide-angle lens, a new periscope 8MP telephoto lens (up to 10x hybrid zoom and a 50x digital zoom) and a ToF sensor. The P30 won't have a ToF sensor, but will still have a triple rear camera as well (40MP + 16MP + 8MP).

[Update] Someone hinted (thanks Mr Anonymous) that on top of the freebies above of a Huawei Watch GT Active and JBL Clip 2 Bluetooth speaker, Malaysians could also get the Huawei Backup included as well. Just for a refresher, the Huawei Backup is a fast charger that also acts as an automatic or manual backup with a built-in 1TB hard disk drive worth ~RM425, which could mean a much bigger value deal with the Huawei P30 Pro. Oh, and they also said we just might get it on 6 April 2019 as well.

So what do you think? The Huawei P30 Series will be unveiled as soon as next week so expect much news about it. We will definitely be there for the official coverage so stay tuned only at TechNave.com.