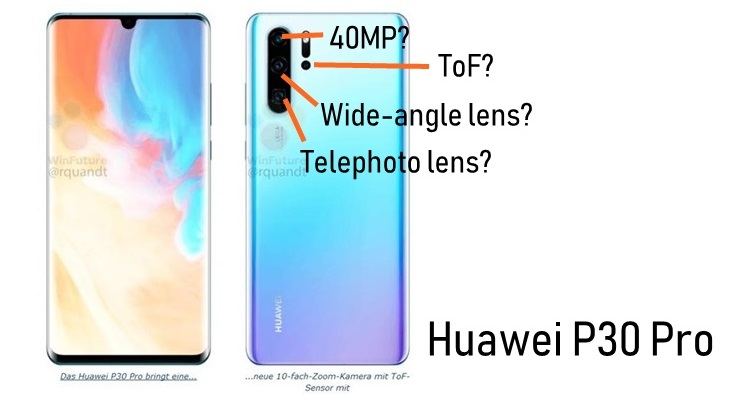 There are a couple of Huawei P30 series leaks here and there, but there are just mostly about the zoom-in photos taken at someone's wedding and in a concert. This time around, somebody just decided to give off a bunch of key tech specs and features of the P30 Pro and P30's triple rear camera configuration and what it has. Let's check it out!

To start off, it's said that the new P30 Pro will be continuing the triple camera setup which is a 40MP + 20MP + 8MP but with some couple of perks. An optical image stabilizer (OIS) is found on the primary sensor with a much bigger F/1.6 aperture, followed by the 20MP sensor featuring a wide-angle lens. The third one is equipped with a telephoto lens and can achieve a 10x hybrid zoom. There's also a Time of Flight (ToF) sensor somewhere on the back as well, which in a way, kinds of makes it a quad-camera setup tapi bukan.

Meanwhile, the younger sibling - P30 will also have a triple camera setup but with a different configuration. a 40MP (non-OIS) + 16MP (wide-angle lens) and an 8MP (telephoto lens) combination. It's not known if the telephoto lens can also go up to 10x hybrid zoom. Besides that, Huawei is also planning to introduce a new AI voice assistant, face payment as well as a new GPU Turbo 3.0 that will support more games.

The new P30 Series will be unveiled soon next week on 26 March 2019 in Paris, France. Stay tuned as we will be checking them out only at TechNave.com.