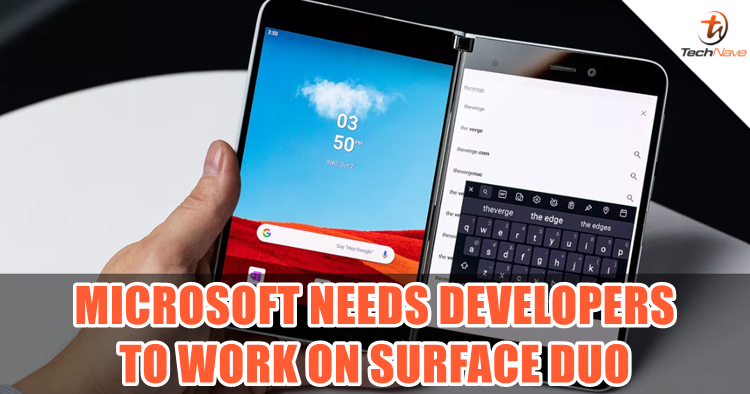 In last year’s October, Microsoft have debuted two folding devices named Surface Neo and Surface Duo. Both of them are able to be folded inside and outside with a hinge mechanism (not folding screen here). Today, the company has released the Surface Duo preview SDK that allows developers to express their creativity on the two-screen device.

The Microsoft Surface Duo is actually the company’s first Android smartphone and also the first foldable smartphone. After failing with Windows phones, it looks like the lesson has been learned of not using Windows OS for smartphone products. It is also said that Microsoft has been working closely with Google to bring great features to the users.

In context - this feels even more magical. pic.twitter.com/8yLLoioE1K

Now, let’s talk about how can the device be used and what makes Microsoft’s foldable device different from the others. It seems like there are five ways for users to interact with the device, which includes window mode, split-screen, dual view, companion pane view, and double-portrait or double-landscape layouts. The device is also able to run two programs simultaneously on different screens that are separated by a hinge, which makes it easier for users instead of viewing two programs on only one screen.

It is unsure whether when will the device be released. As Microsoft is now only trying to get the software right before getting to the hardware, it might still take some time for the device to be fully mature.

Let us know what you think about the Microsoft Duo on our Facebook page. Stay tuned to TechNave.com for more awesome tech news.