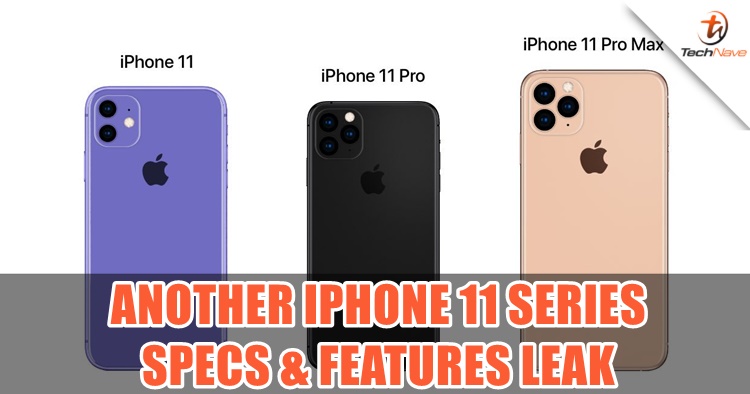 Not a lot of Apple iPhone 11 series rumours can be found online these days. If anything, it's just tidbits here and there. However, we have found an interesting image on Twitter by @TheAppleHub as they have recently posted a full-blown tech spec and the price tag for each iPhone 11 model. Let's check it out.

As previously rumoured, the three iPhone 11 lineup will be called as the iPhone 11, iPhone 11 Pro and the iPhone 11 Pro Max. Starting with the iPhone 11, this model will be the iPhone XR equivalent so most consumers will be able to afford this model the most among the three. The 6.1-inch LCD also fits the bill, along with 4GB of RAM, dual 12MP rear cameras (not sure if this meant the other sensor is also 12MP), 3110mAh battery and has three memory variants starting from 64GB, followed by 256GB and then 512GB.

Previous rumours about the iPhone 11 Pro and iPhone 11 Pro Max display size is accurate too, with a 5.8-inch and 6.5-inch OLED display. 6GB of RAM will be there and it also says triple 12MP rear cameras, which implies that all three sensors are 12MP. The storage is the same with 128GB, 256GB and 512GB, whereas the battery pack are 3190+mAh and 3500mAh+ respectively. Moreover, it's intriguing to see an Apple Pencil support written there as well and both will have a frost glass design which could mean for the stylus to work on.

This year, it’s all about the cameras! If you’re upgrading this year, which model would you get? #iPhone11 pic.twitter.com/3T506bqLOH

On top of that, the image also says the iPhone 11 series are WiFi 6 certified and through a quick search online, this connectivity has just got permitted this month. The "Bilateral" wireless charging could also mean reverse wireless charging. Also, 3D Touch won't be coming back as expected as Apple only relies on Face ID since the introduction of the iPhone X two years ago. The A13 Bionic chipset is to be expected.

As usual, do take this news with a pinch of salt since it's just out of pure speculation but what do you think? And are you looking forward to the iPhone 11 series this year? Let's discuss and stay tuned for more Apple news at TechNave.com.