Due to the decision to pull out of MWC 2020 and Sony not announcing any new launch dates, leaks have become the only way to find out what the company's new Xperia devices would be like. Luckily, Max Weinbach posted the series of images that revealed the Xperia 1 II and Xperia 10 II, which are Sony's next generation of mid-range and flagship smartphones.

The Xperia 1 II is a 5G device that comes with a Qualcomm Snapdragon 865 chipset, 8GB of RAM, 256GB of internal storage, and a 6.5-inch 4K OLED display. One thing that was ambiguous was the part about the display's Motion Blur Reduction that said to be '90Hz equivalent'; it sounds like Sony designed the display to have smoother motions without actually having a high refresh rate. Besides that, the phone has five cameras at the back - three 12MP lenses paired with a ToF and 'Real-time eye AF'. 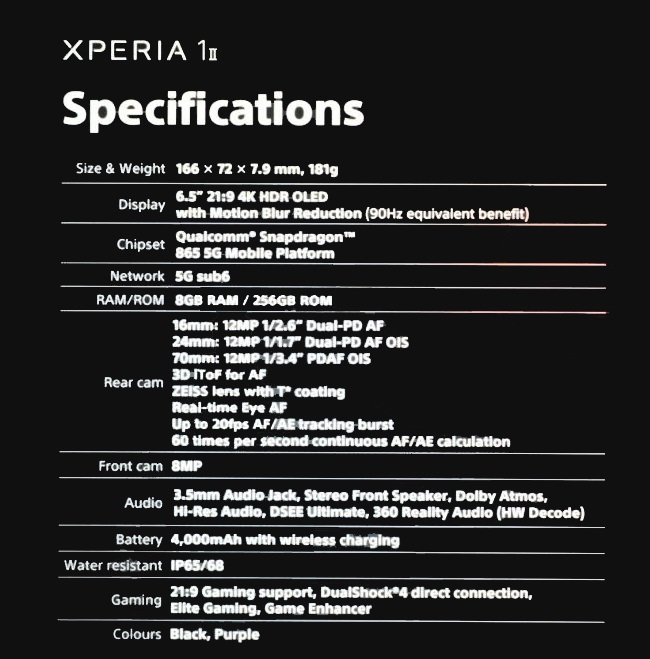 As for the Xperia 10 II, this one is a mid-range device powered by an older Snapdragon 665 chipset. It also has 4GB of RAM, 128GB of internal storage, and a 6-inch OLED display. The rear has a simple triple-camera setup (12MP+8MP+8MP). All in all, this model seems to be a fairly normal mid-ranger with no standout features.

Leaks from Max Weinbach have proven to be rather accurate so far, but it's best to not get too excited since there's no official word to validate the leak. With that said, would you consider these Sony Xperia devices if they are launched in Malaysia? Let us know on our Facebook page and stay tuned to TechNave.com for more news like this.