As OPPO’s newest phone F3 and F3 Plus gets closer on 23 March 2017, it was only a matter of time for GFXBench to show us what the phones are capable of. Besides from the much-hinted dual front cameras, we gotten more information about the tech-specs and this is what we got. 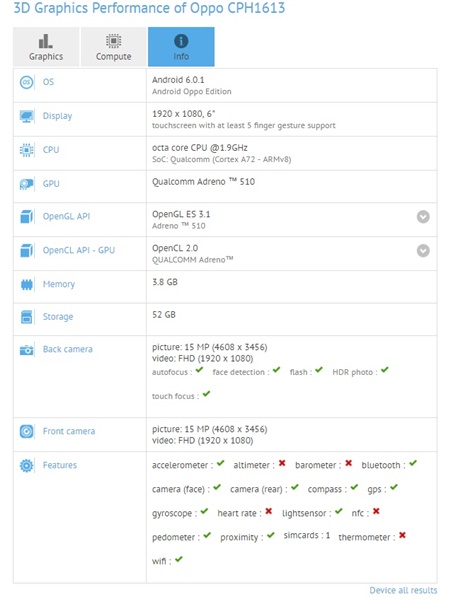 According to GFXBench, it seems that the F3 Plus has tally with its previous tech-specs rumours, confirming a full 6-inch FHD display, Snapdragon 653 chipset, Android 6.0 Marshmallow is also pre-installed, as well as the 4GB RAM and 64GB of internal storage, along with the massive 4000 mAh battery. However, there is one subtle difference, which is the camera; it’s said to use a 15MP rear camera, while the dual front camera is using 16MP + an unknown sensor.

If we had to guess, the unknown sensor at the dual front camera is probably a telephoto lens just like the iPhone 7 Plus, which totally fits the 5x Dual Camera technology that we last saw at the MWC 2017. But what do you guys think? Is having a dual front camera actually practical? Let us know in the comments below and stay tuned for more OPPO news at TechNave.com.