Rumours: Samsung Galaxy S8+ to have a whooping 6.2-inch display! While the Samsung Galaxy S8 and S8 Plus isn’t exactly scheduled for the upcoming MWC event at Barcelona, it seems that there’s been quite some leaks recently. A portion of the Samsung Galaxy S8+ specs sheet had just been leaked, indicating most of the main features of the flagship device. It sure sports a really huge display!

The image, leaked by @evleaks, claims that the Galaxy S8+ will have a 6.2-inch Quad HD+ Super AMOLED display. While this might seem massive, it is also possibly due to the elongated display of the purported 18:9 screen ratio. 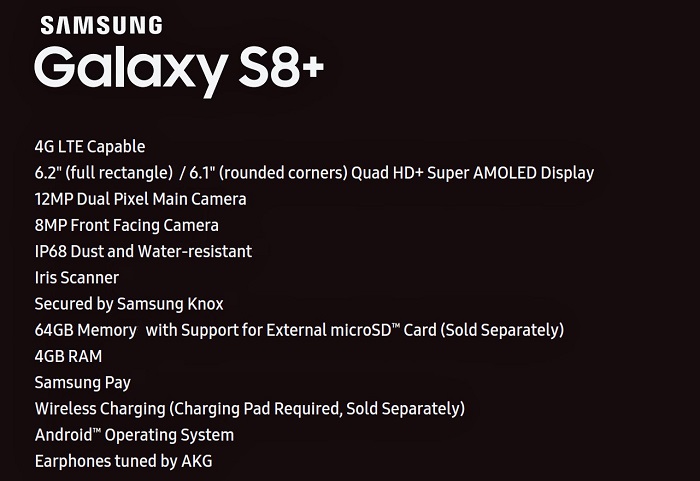 The rest of the specs seemed to be pretty much in line with what had been leaked thus far. It’ll IP68-certified, comes with 4GB of RAM and 64GB of expandable storage. As for the imaging side of things, it will feature a 12MP dual pixel rear camera and a 8MP front camera. An iris scanner, as well as wireless charging and Samsung Pay seems to be part of the “package” too. Apparently, the device will ship with AKG tuned earphones too!

What do you think of this latest leak? Is 6.2-inch too big for your preference, or do you think that Samsung had exceeded expectations this time? Stay tuned on TechNave.com for more updates on the Samsung Galaxy S8 Plus.