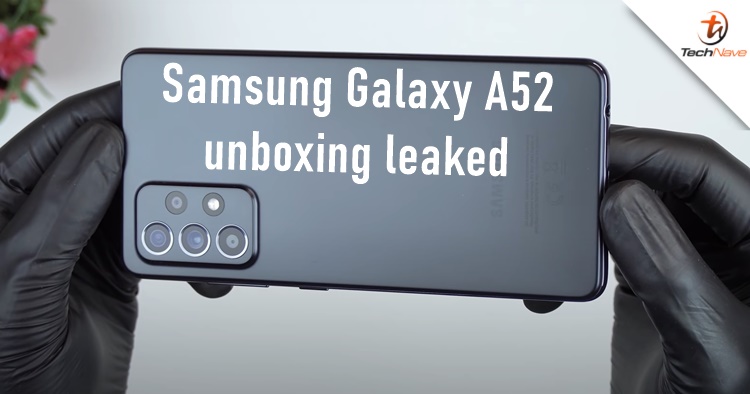 Before we get to watch the Galaxy Awesome Unpacked livestream, someone somehow managed to get his hands on the Samsung Galaxy A52 5G and released an unboxing video. From the looks of the packaging, it seems to from India but anyway, let's see what's in the box.

From the unboxing video, it's expected to see a plastic protective casing, a pin, warranty and a quick start guide booklet. The charging brick appeared later, but what's more interesting is that the design is exactly the same as the render images that we've been seeing. From the video below, you can see that the design follows the Galaxy S21 series.

Because of its charging cable, we can pretty much confirm that the Galaxy A52 5G will use a USB Type-C port. It's been noted that the back is plastic as well even though it looks so polished and shiny. The video further showed more tech specs such as a 4500mAh battery, 32MP front camera, and the 64MP quad rear camera setup too. The phone is also running on One UI 3.1 based on Android 11, Snapdragon 750G chipset and up to 120Hz refresh rate Super AMOLED display.

After that, the rest of the video tested on the camera, fingerprint, audio and mobile gaming. We think the Galaxy A52 5G will definitely appear at the Galaxy Awesome Unpacked livestream. So until then, stay tuned for more trending tech news at TechNave.com.