Design - Yes, it is thinner, stronger yet lighter

At first glance, the Samsung Galaxy Z Fold3 looks smaller than I initially expected but perhaps that’s because I’m too used to phones with larger than 6-inch displays. At 6.4mm thin when unfolded, the Galaxy Z Fold3 is actually thinner than the 6.9mm thin Galaxy Z Fold2 but this also somewhat explains why it is also lighter at 271g. Like the Galaxy Z Flip3, the Galaxy Z Fold3 has a tighter hinge, IPX8 water resistance and an improved 6.2-inch Dynamic AMOLED 2X Cover display with 120Hz refresh rate and somewhat narrow 25:9 aspect ratio. 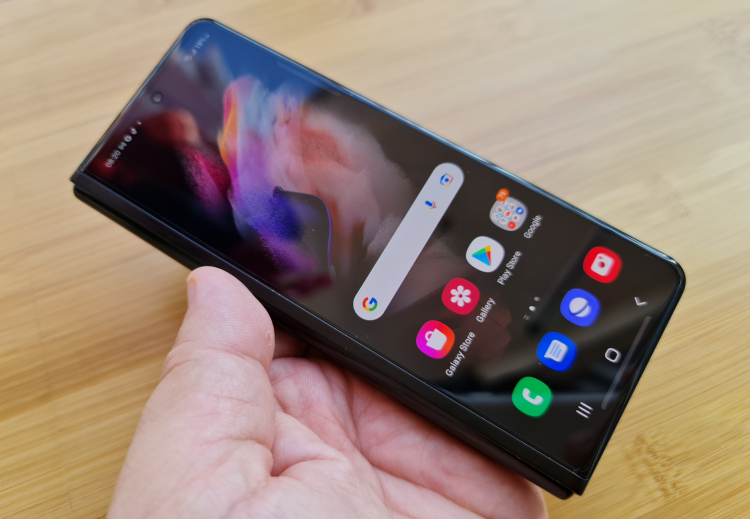 When folded, the Samsung Galaxy Z Fold3 has a rather narrow 6.2-inch Cover Display which now has a 120Hz refresh rate 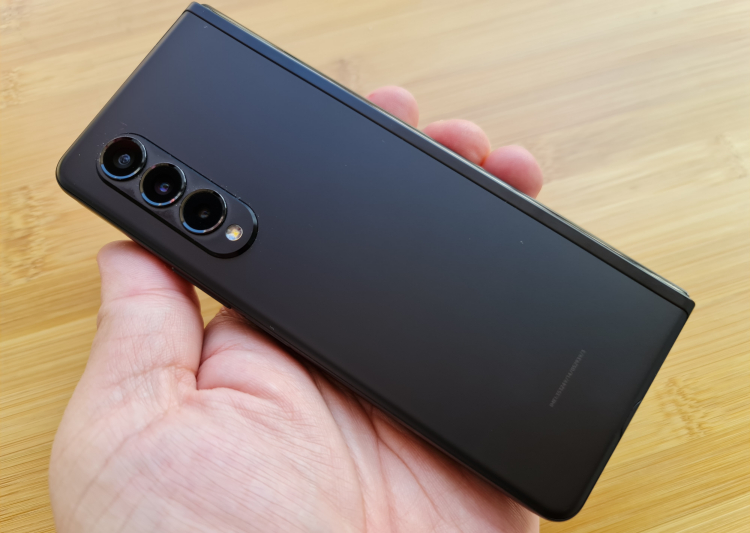 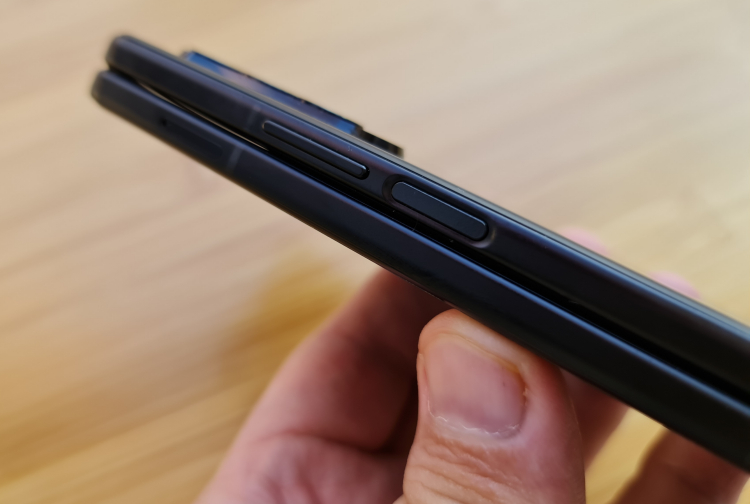 Make no mistake, at 271g, the Galaxy Z Fold3’s weight is almost as heavy as a 10-inch tablet, but somehow thanks to the slimmer candy bar form factor, it’s easier to grip and hold when folded than my lighter but wider Galaxy Note 20 Ultra. When folded, everything from the main 7.6-inch Dynamic AMOLED 2X display switches to the aforementioned cover display, while a 10MP punch hole front camera is there as well.

However, when it is unfolded, the 7.6-inch main display takes centre stage, mainly because the under-display 4MP front camera is not visible at a distance (you can see it as the area with larger pixels at an angle or really up close though). The screen looks crystal clear and Ultra High Definition but does have a more square-like look, but with rounded corners. As before, the crease is still there, but when viewed straight on, it doesn’t distort any of the graphics, so you tend to forget that it’s there sometimes. 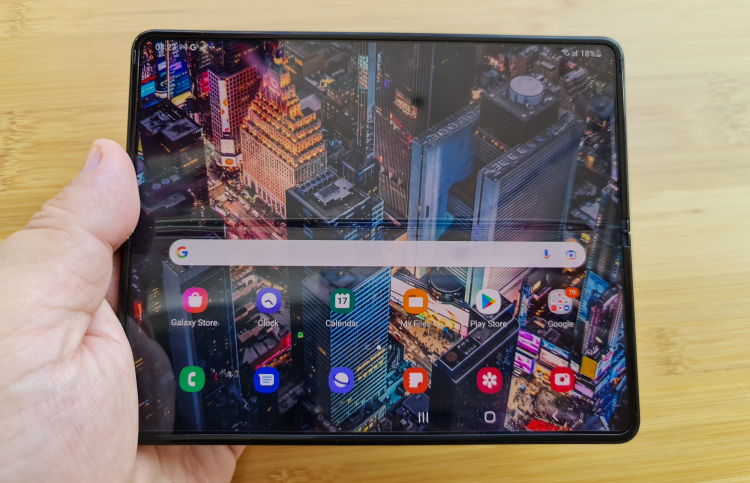 When unfolded, the Samsung Galaxy Z Fold3 has a 7.6-inch display while the 4MP under display front camera is nearly invisible

The hinge of the 6.4mm thin Samsung Galaxy Z Fold3 is now tougher and rated for IPX8 water resistance The rear of the Samsung Galaxy Z Fold3 when unfolded 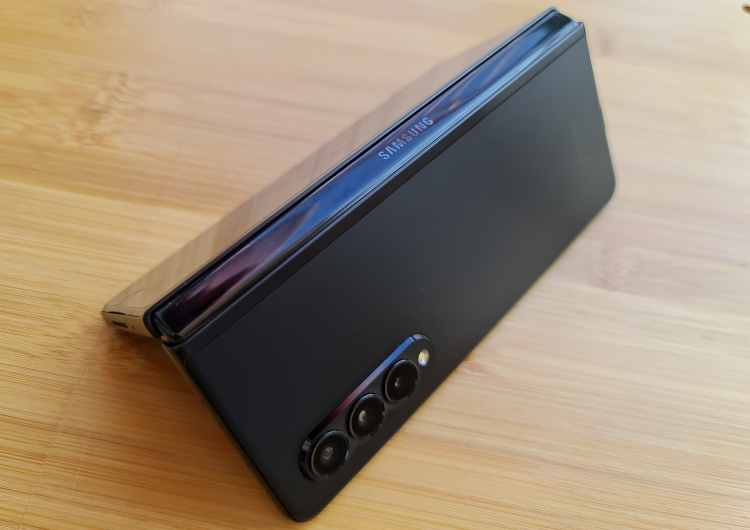 The tighter and tougher hinge on the Samsung Galaxy Z Fold3

On the back, there is a more discernible 12MP+12MP+12MP camera hump which also means that when unfolded without a case, the phone is not able to lay flat. On the side, there is a fingerprint sensor built into the power button with a volume rocker just above it along with a 2x nano SIM card tray. Stereo speakers are placed on both sides while a USB Type C port is located on the bottom side.

In short, the new Galaxy Z Fold3 is not only lighter and thinner than its predecessor, it is also stronger and more water resistant. While it may not share the same two toned colours as the Galaxy Z Flip3, there is an interesting new green colour this time around and the new Galaxy Z Fold3 definitely looks more stunning and unique in the current smartphone market where nearly every smartphone is a rectangular slate. If you take a closer look at an angle, you can now see the 4MP under display camera on the Samsung Galaxy Z Fold3 Tech Specs and Features - Foldable flagship features all the way 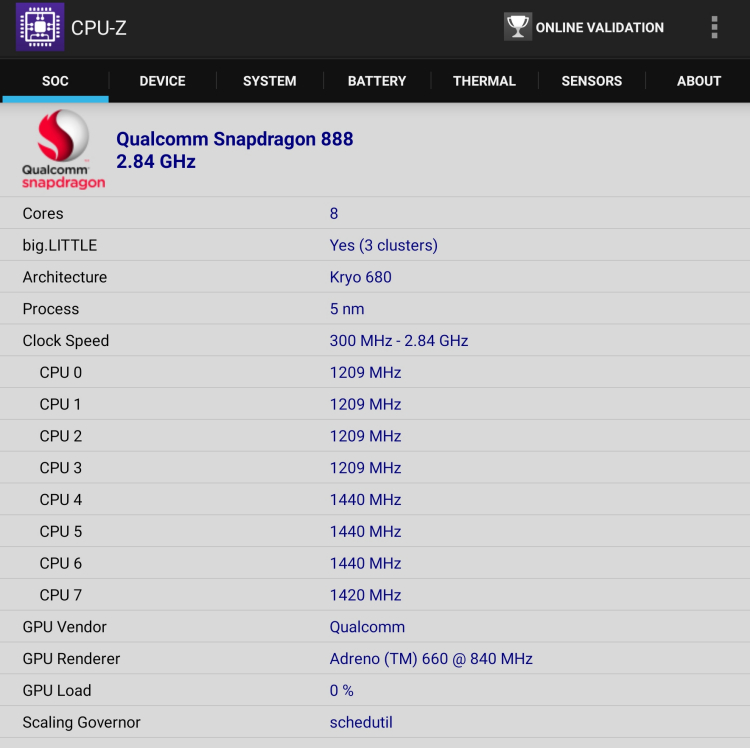 While the design has been strengthened and the overall frame has been improved with IPX8 water resistance, the only major changes for the Galaxy Z Fold3’s internals is the Qualcomm Snapdragon 888 chipset, the 4MP under display front camera and support for the new S Pen Fold and S Pen Pro styluses. The 6.2-inch Cover Display now has an up to 120Hz refresh rate but other features mostly remain the same (except perhaps that the box is much thinner this time around).

For cameras, there is the aforementioned 4MP under display front camera while a 10MP (F2.2) punch hole front camera is located in the 6.2-inch Cover display. On the back there are 12MP ultra-wide angle (F2.2) + 12MP telephoto (F2.4, OIS, Dual Pixel AF, PDAF) + 12MP wide-angle (F1.8) triple rear cameras. There’s a Pro mode for both photos and video recording and there’s also Samsung’s Single Take feature as well. 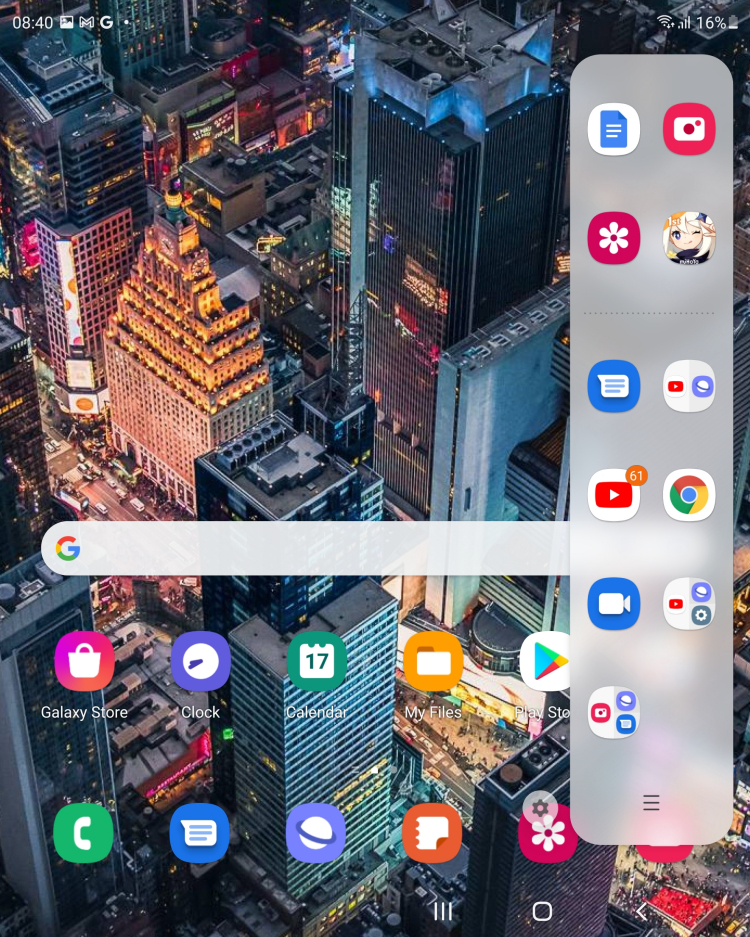 This is what you'll see on the 6.2-inch Cover Display

The Photo Pro Mode is still usable on the Cover Display 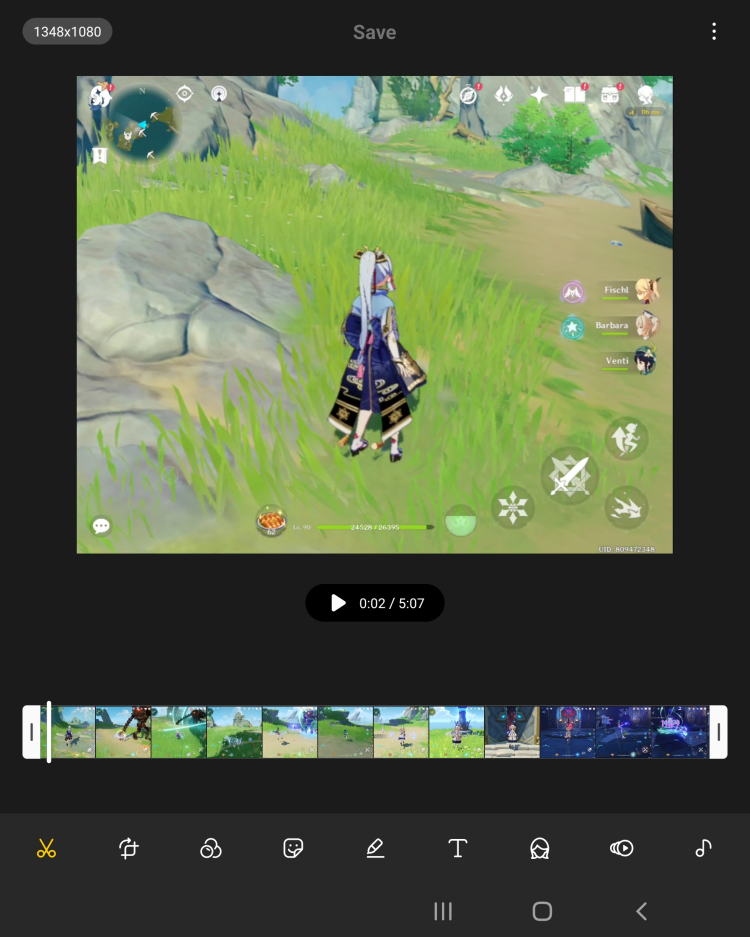 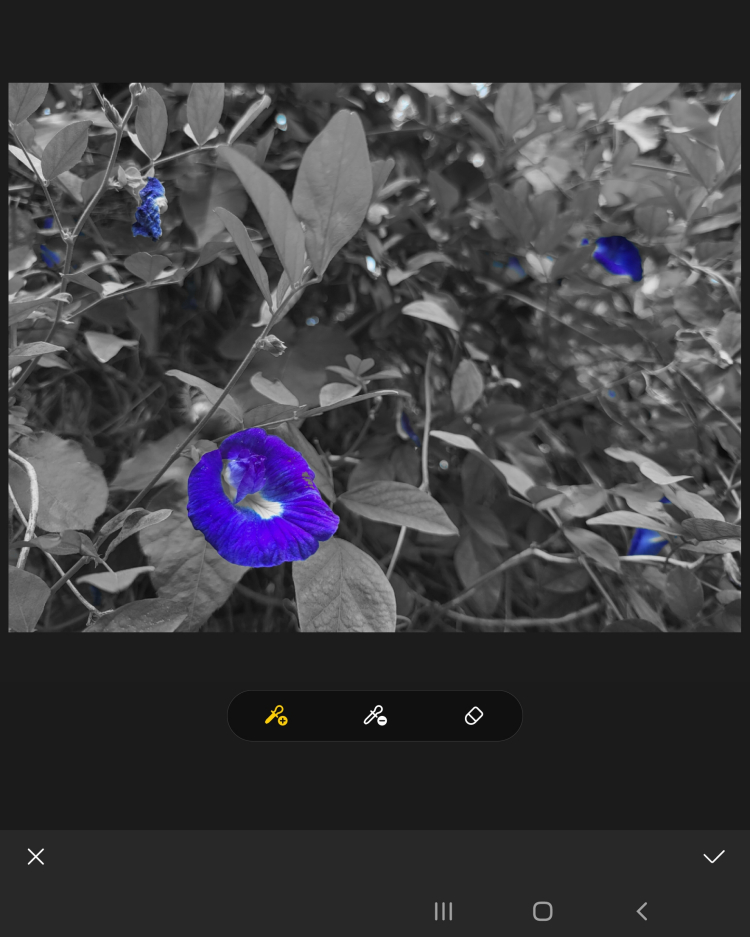 The smaller and thinner look has resulted in slightly smaller dual batteries that combine for an up to a 4400 mAh battery. It supports 25W fast charging, 10W fast wireless charging and 4.5W reverse wireless charging. The IPX8 water resistance rating means that it is rated to withstand up to 1 meter depths for 30 minutes, while the X means that it still hasn’t been tested for dust resistance yet but early tests have been good as long as you don’t get itchy fingers and peel off the screen protector (basically, leave the screen protector alone).

The new screen for the Galaxy Z Fold3 can also support the new S Pen Fold and S Pen Pro (you have to manually set it though) styluses, but since we didn’t get them yet, we couldn’t test them. Productivity features also mostly remain the same here with Samsung’s DeX mode for both wired and wireless setups while the Flex mode can also be applied to all apps.

Here are all the tech specs and features of the Samsung Galaxy Z Fold 3: 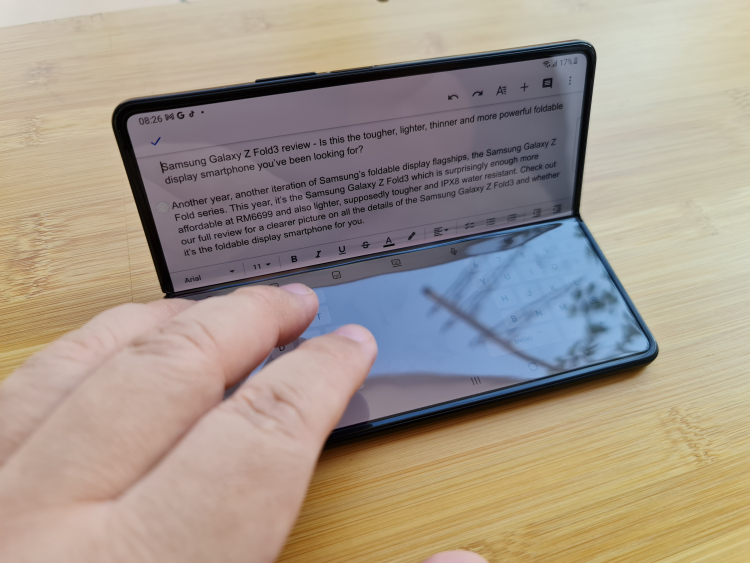 Performance - Aced all our benchmarks 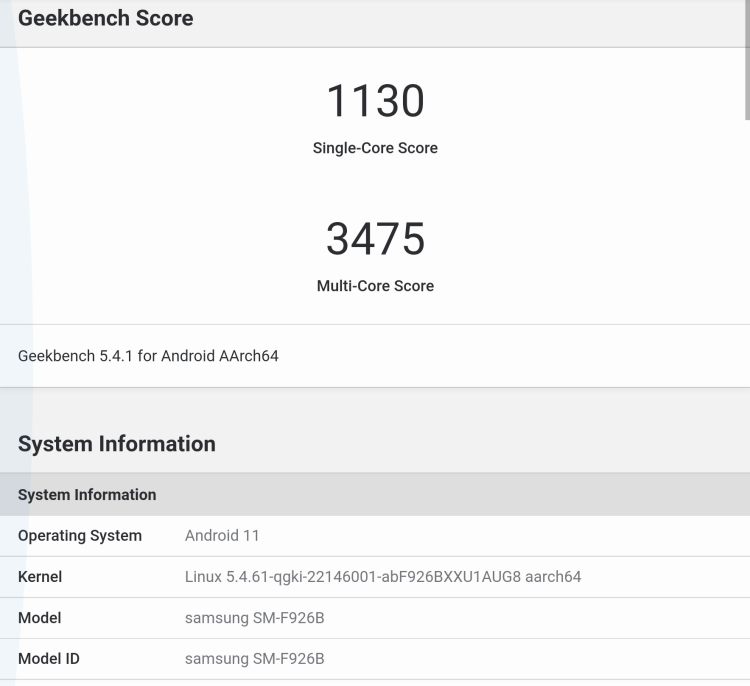 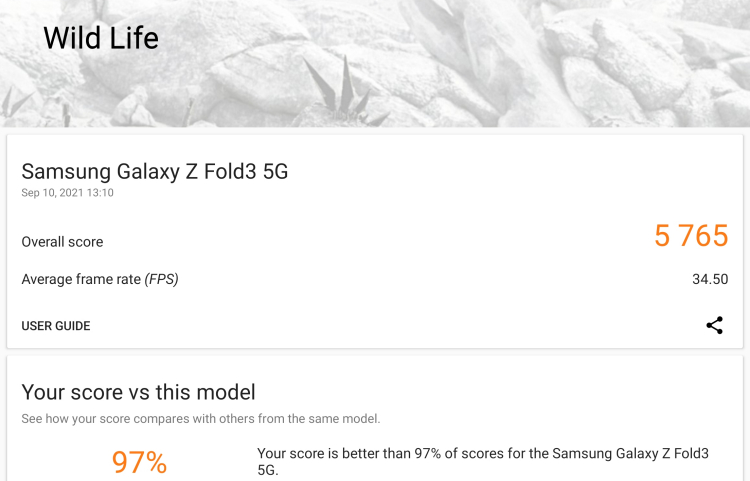 Performance-wise, the Galaxy Z Fold3 aced all of our benchmarks with the highest score possible in GeekBench 5. Other benchmarks like 3DMark were also quite high as well. Playing Genshin Impact on the Galaxy Z Fold3 was super smooth on medium or default settings, but it did cause the phone to get quite hot, particularly on the hinge area. Perhaps due to the larger display, when it is unfolded, the games tend to focus in on the character, making it seem like it covers less space than if you were to play in say the Cover Display. However. we also noticed that when you fold it mid-game, Genshin Impact becomes somewhat squished on the Cover Screen, but looks just fine if you start the game from the Cover Screen itself (something that probably applies to some other apps as well).

Despite having multiple large 120Hz screens (7.6-inch foldable display, 6.2-inch cover display), battery life for the Galaxy Z Fold3 is pretty good at about 1 day and a bit more on normal usage. Heavy users could expect it to need charging after half a day though but it does have 25W fast charging which should get you back to 100% in an hour and a half. The reverse charging or Wireless PowerShare could be useful in a pinch, but given the Galaxy Z Fold3’s own battery needs, I don’t think it would be used often. 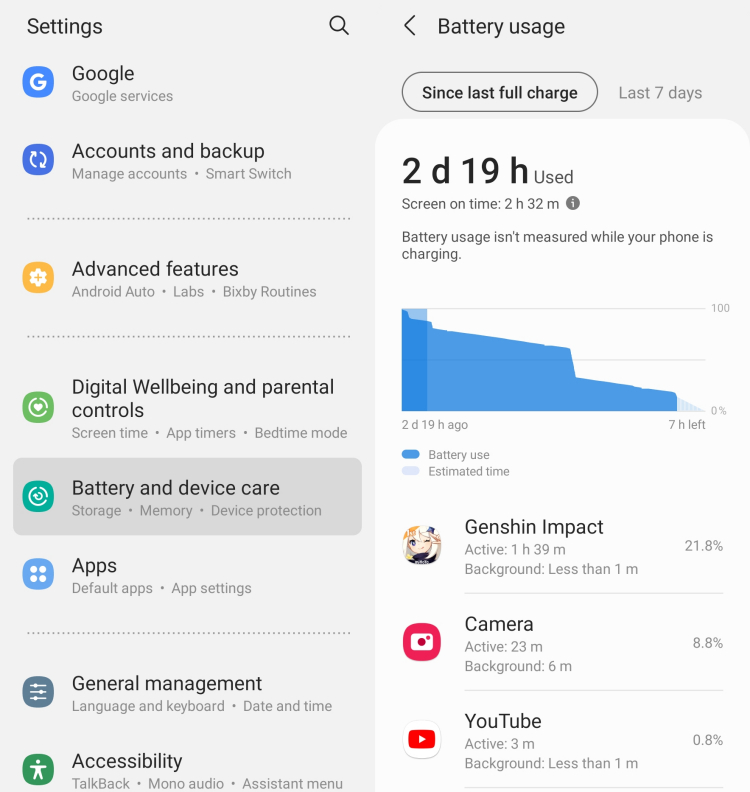 On intermittent usage you can get about 2 days, but normal usage should be about 1 day and a bit more for the Samsung Galaxy Z Fold3

However, if you fold the Samsung Galaxy Z Fold3 mid-game, the app or game could end up somewhat squished

Connectivity was very good while sound was loud and clear. Applying Flex mode to Google Docs effectively turns your Samsung Galaxy Z Fold 3 into the world’s smallest touchscreen laptop but the keyboard does take some getting used to. There’s barely enough room for my big fingers but you can touch type with some practice (I wouldn’t recommend it but you can if you want, the phone is fast enough to handle anything). 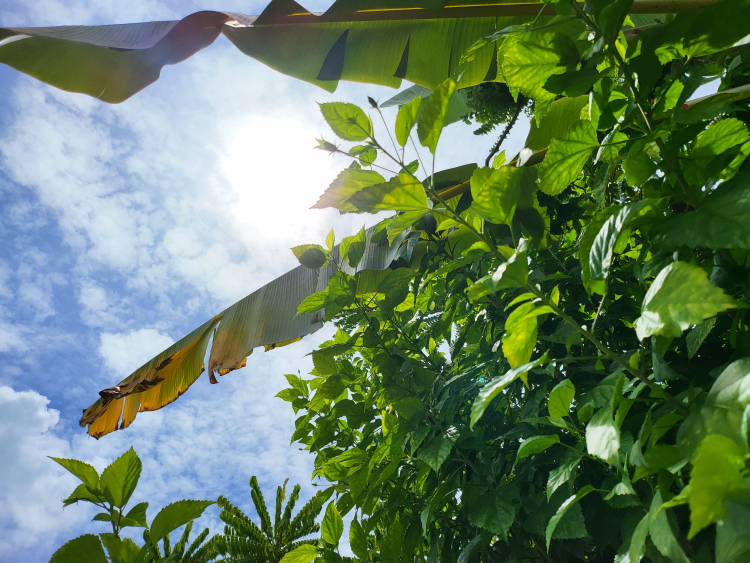 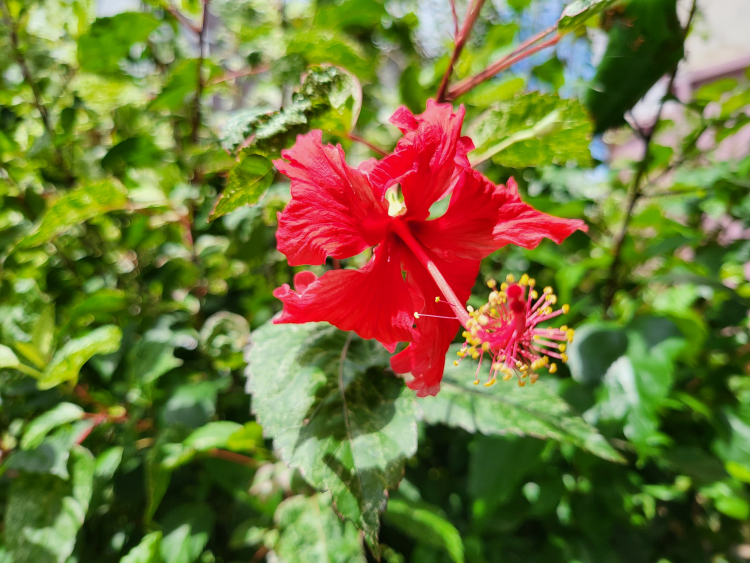 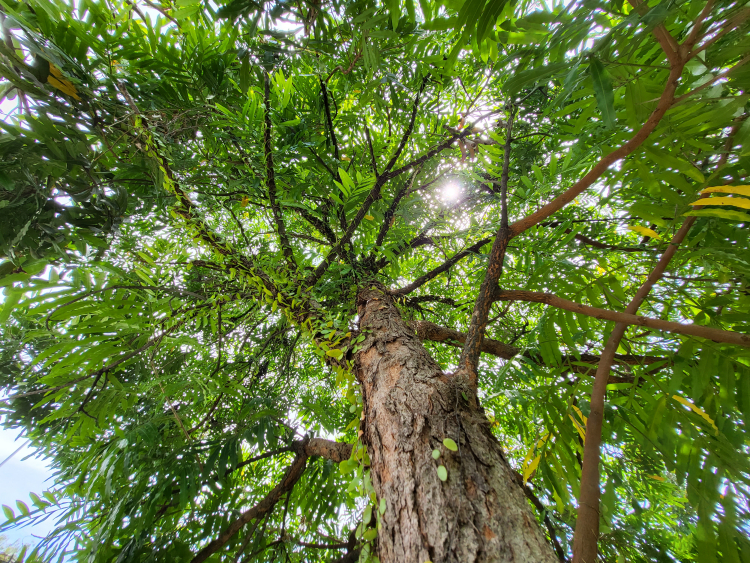 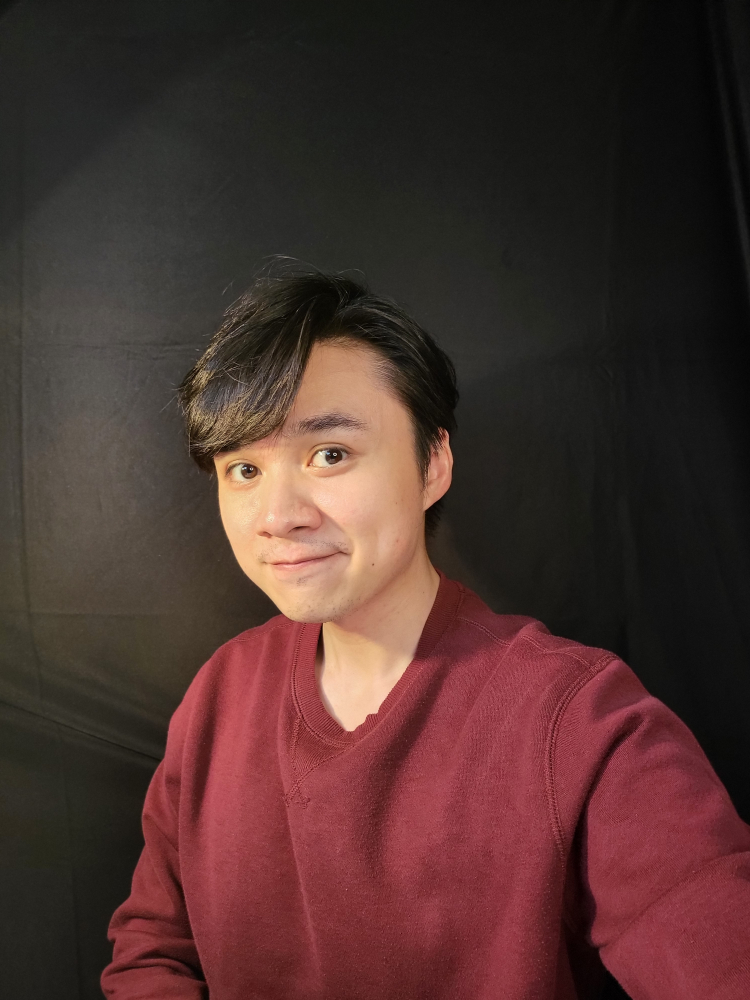 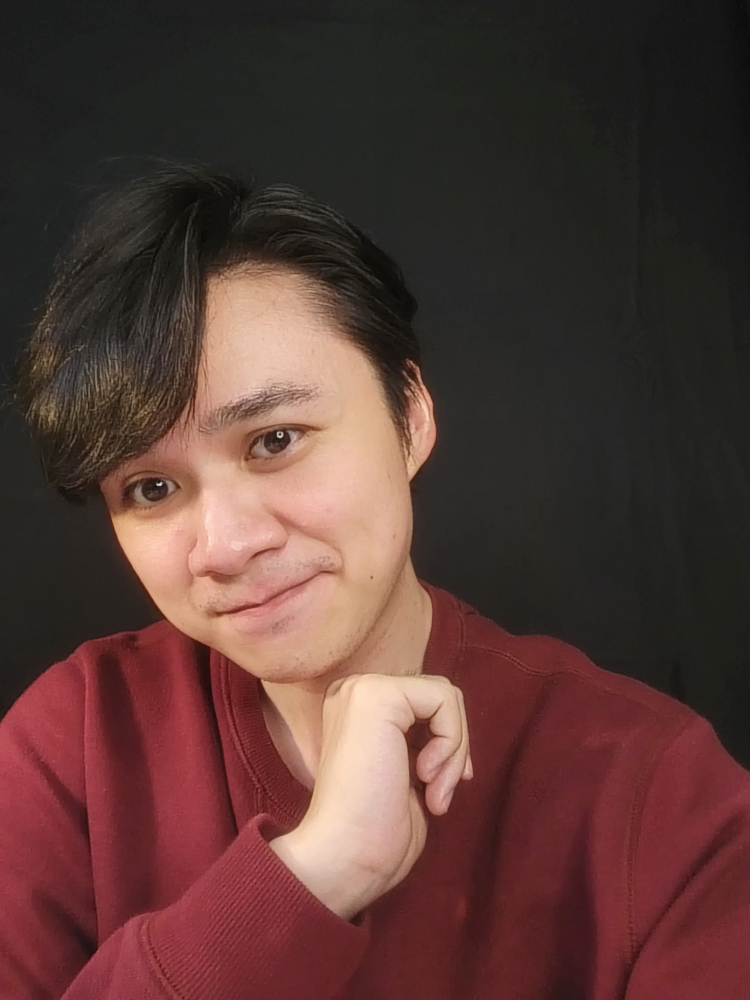 Selfies on the 4MP under display camera are serviceable and good enough for most online meetings, but if you’re really looking to get a better selfie you can just fold the phone and use the 10MP front camera in the Cover Display. Video recording is super steady while the various pro modes let you take photos easily (without a need for a tripod).

Conclusion - The best foldable smartphone you can get yet

Overall, the Samsung Galaxy Z Fold3 is the best foldable smartphone you can get at the moment. It ticks all the checkboxes for a flagship Samsung smartphone (Qualcomm Snapdragon 888, IPX8 water resistance, S Pen support) and it is lighter, tougher and at RM6699, more affordable than when the first Galaxy Z Fold smartphone initially came out. If you have the money and desire for it, then you can use it for practically anything. 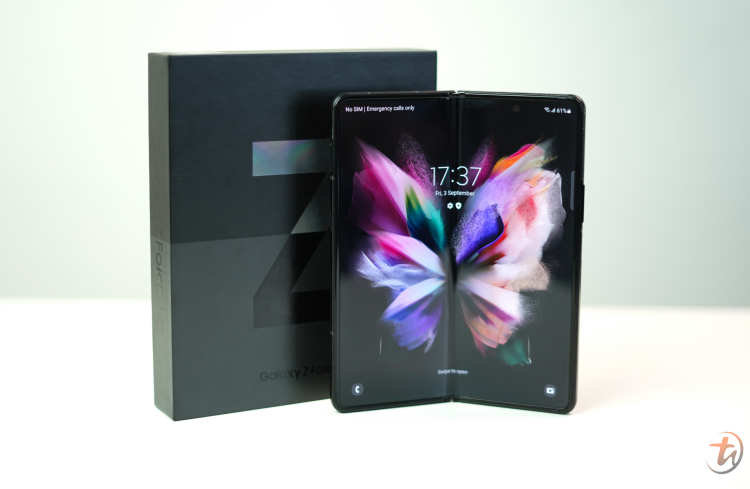 We did have some nitpicks with it like the automatically squishing switch from the main display to the Cover Display, but perhaps that and other improvements may arrive with further updates. The obvious thing that you may have to sacrifice to use the Galaxy Z Fold3 is the heavier weight, but 271g is still not as heavy as most larger than 7-inch display tablets (and there have been much heavier smartphones before), so we don’t think that that would be that much of an issue if you're into larger phones.

For other contenders, you could get the first Galaxy Z Fold if you absolutely must have a foldable display device, but be aware that you should definitely be more careful with that one. Alternatively, there’s always the Galaxy Z Flip3 which is also tougher, lighter and more pocketable (check out our review) but now going for the price of RM3999 which is about the price of most flagship smartphones these days.

Would you be thinking about getting the Samsung Galaxy Z Fold3 or have bought one already? Leave a review in our app or let us know how you feel about it in our Facebook page and stay tuned to TechNave.com.