The Samsung Gear S3 Frontier really looks stylish and cool. Not just the design, but it also offers near perfect features with just one missing out from making it the complete working smart watch we all dream of. Keen to know what makes it incomplete? Stay tuned, as we will tell more about the awesome parts of the Gear S3 Frontier and what exactly it’s lacking in the review below.

We tested the Samsung Gear S3 Frontier using both Android and iOS. Thanks to Samsung's recent release of the IOS version of Samsung Gear in early January, Apple iPhone users now have a new choice for more affordable but quality smart watches with more functionality instead of being limited to just the rather pricy Apple watch. There are differences between the Gear S3 Frontier running on Android and iOS though. Read on and find out more. 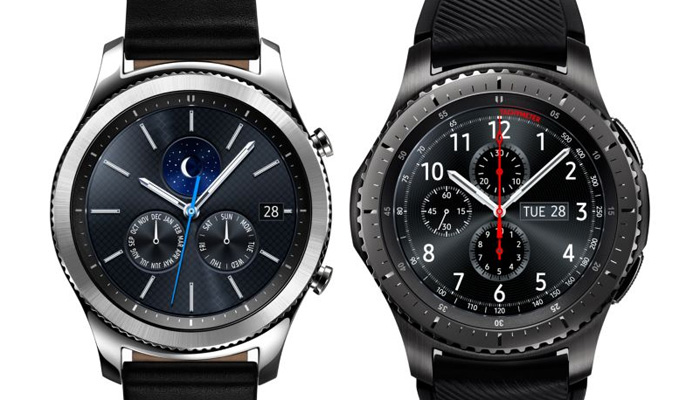 The Samsung Gear S3 feels like a traditional mechanical watch

At first glance, the Gear S3 Frontier exudes a big “wow” as it looks very much like a traditional mechanical watch like Tag Heuer, Seiko and so forth. The watch is slightly big for women or smaller wrists but Samsung does offer a smaller strap as well. The watch feels comfortable, neither light nor heavy for me, but definitely heavier than a plastic made digital smart watch. The soft rubber is a bit sticky to the touch though but maybe that is just me. The shiny metal with a nice bezel and crown feels premium, making it a good choice for the white collar executive on the go.

Samsung’s signature rotating bezel fits seamlessly around the screen, and turns incredibly smoothly, where you can feel the clip for each turn. With the latest crown design, it lets you easily grip and control the watch. The rotating bezel really helps in navigating from screen to screen, app to app and page to page while you are moving so you don't end up blocking the screen with a finger or two.

The Samsung Gear S3 Frontier comes with a lot of built in features and sensors, making it able to work standalone without pairing to phone. This is rather useful for those who would like to workout or run freely without bringing anything else. It has a lot for fitness tracking features just like in the in Samsung Gear Fit 2 such as a step counter, fitness reminder, interval heart rate recording and social sharing features for motivation via the Samsung S Health app.

The tech specs of the Samsung Gear 3 Frontier are as follows:

Nowadays, we use a lot of voice messaging apps such as Whatsapp and Wechat, which is a feature we saw previously with the ASUS ZenWatch 2. Unfortunately, you can only read text messages and reply them either by typing or using voice to text translation. Also unfortunately, the voice to text dictation does not always work well.

You can reply to a text message directly from the watch

Asides from this, we also found that the Gear S3 Frontier lacks app support and some fallback of features when running on iOS devices. Do check out the comparison below. In our music transfer test to the Gear it even failed to open the Music Manager to get the IP address. The app bounced back to the previous screen when we tapped on the start button.

We never felt any lagging during the testing and the watch was responsive, fast and smooth. The wifi and Bluetooth connection is stable as well. The loudness of the built-in speaker is just good enough but definitely you would still prefer playing the music from your phone if you had a choice. However, it is good enough to notify you with more details via voice on top of vibration. We tried to make and answer a call via the Gear S3 Frontier and the experience was good. 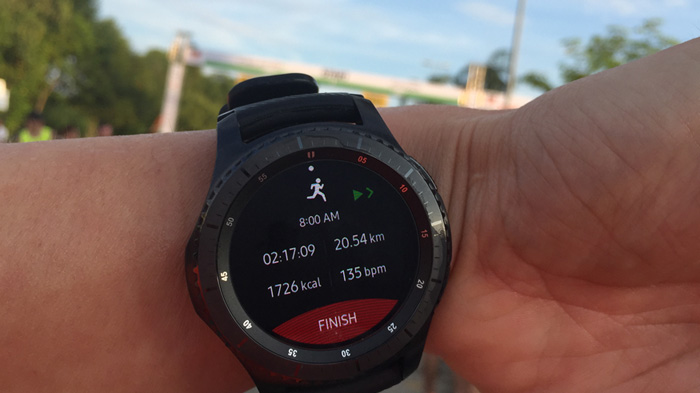 The biggest improvement Samsung did for the Gear S3 Frontier is the battery itself. When compared to its predecessor, it has been upgraded from 250mAh to 380mAh. During our test (with location On, wifi Auto, Bluetooth On, auto brightness and Always Display Off), the Gear S3 Frontier can easily last for one and half day for an hour workout. The most impressive part is it consumed only 20% of the battery for a half marathon run (21KM) while the built-in GPS was turned on.

Comparing the Gear S3 Frontier to it’s predecessor the Gear S2 and the recently launched Galaxy Gear Fit 2, the Gear S3 Frontier has better accuracy for GPS and heart rate monitoring. The differences of distance tracked for a half marathon run is just about 2%. It is worth mentioning that, for some of the test runs, it took quite a long time for the gear to lock down the GPS.

This definitely will make the tracking distance inaccurate. Sadly, there is no available option to initially lock down the GPS first before the workout start. Among my various workouts, I found that the heart rate tracking is reasonable although there was one time I saw it went too high up to 205 out of my past record which usually maxes at 185 (Measured with heart rate belt). 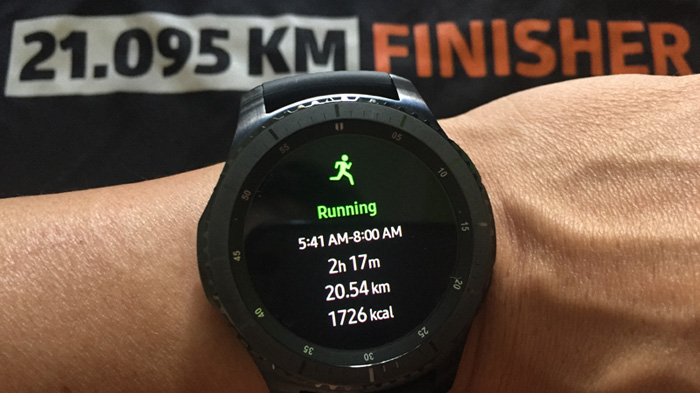 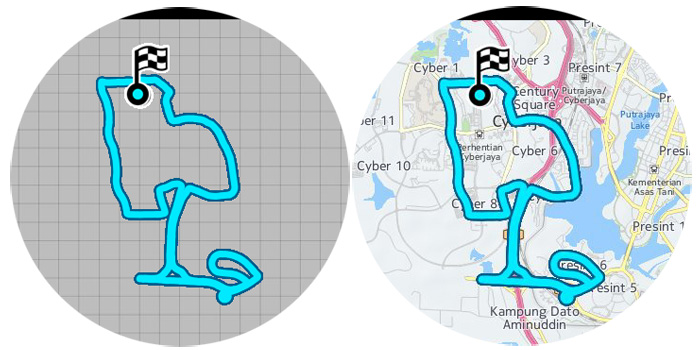 Running map: Before (Left) and After synchronized with the phone for map details (right)

Conclusion – A Smartwatch for the cool and stylish sportsman

The Samsung Gear S3 Frontier is a really nice looking watch with its premium look and feel. The rotating bezel is super awesome and it has all the essential fitness tracking and workout features you'll need for most workouts. Even though the tracking accuracy is not up to professional levels yet but it is almost there. Again, we feel that the voice messaging feature is important enough to make the Gear S3 Frontier feel incomplete.

In conclusion, I would go for Gear S3 Frontier for its rugged and beautiful design, the rotating bezel and fitness features. It is really worth to consider for the price of RM1399. If you prefer the more classical looking smartwatch, the closer competitors could be the Asus Zenwatch 3 or the Huawei Watch which are lighter and thinner. Between these two, the Asus Zenwatch 3 is newer (released in Dec 2016), slimmer and looks more premium to us but with lesser fitness features compared to the Huawei Watch. Another option for a sporting and rugged looking smart watch is the Moto 360. The Moto 360 has almost all the fitness tracking features as Samsung but it doesn’t give us the same premium feel as the Gear S3.