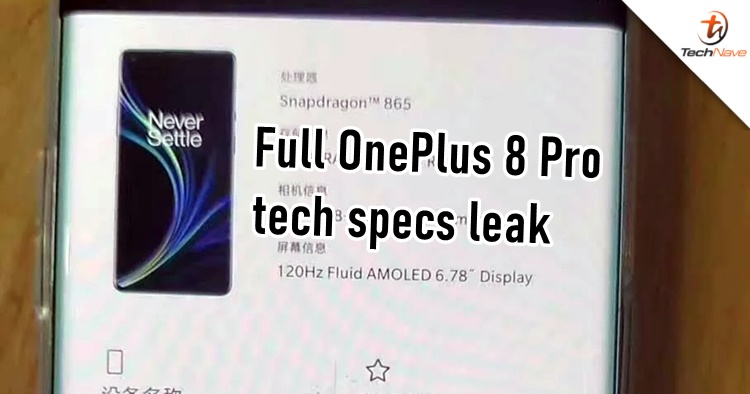 As usual, smartphone tech specs tend to leak just before the official launch and someone just did that for the OnePlus 8 series. Discovered on a YouTube video, the user managed to get on hold of an OnePlus 8 Pro retail box showing all the major tech specs and design. Here's what we can probably expect.

As expected, the Snapdragon 865 chipset can be found on the flagship, so as the 120Hz Fluid AMOLED display that was already confirmed. Measuring 6.78-inches, the pro variant features 12GB of RAM and 256GB internal storage space (UFS 3.1). The quad rear camera setup also matches the rumours which are 48MP + 48MP + 8MP + 5MP, the main camera is said to be using a Sony IMX689 sensor while the ultrawide lens is Sony IMX586.

Besides that, the tech specs information below further shows that the flagship will run on Android 10 out of the box with their own customized user interface - the Hydrogen OS 10.5.2. Moreover, OnePlus already said the flagship will be supported with a 30W wireless charging so that's something to look forward to. The battery pack is 4510mAh and the phone will come in Onyx Black, Glacial Green and Ultramine Blue.

The official livestream will begin at 11PM Malaysia time tomorrow (14 April). Will you be staying up to catch the show? Because we will! Until then, stay tuned for our official OnePlus 8 series coverage at TechNave.com.