Someone leaked the full tech specs of the OnePlus 8 series 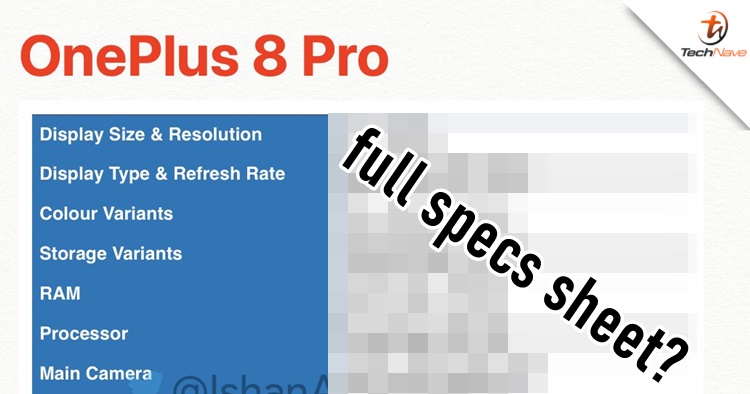 With the extension of the Movement Control Order, it seems more smartphone brands are fully embracing live stream events. But this doesn't really apply to OnePlus because they have always been doing their live stream annually. Anyway, 15 April 2020 is the date and we might just have our first full tech specs leak of the Oneplus 8 series thanks to @IshanAgarwal24 on Twitter.

Let's start with the OnePlus 8 Pro first. As expected, a Qualcomm Snapdragon 865 chipset (with 5G) is on board and may have two memory variants - an 8GB + 128GB and 12GB + 256GB memory capacity (LPDDR5 RAM and UFS 3.0 version respectively). The Super AMOLED display itself is quite huge too with 6.78-inch (QHD+ resolution) and it's capable of reaching up to 120Hz refresh rate.

Then for the OnePlus 8, this 6.55-inch FHD+ device has similar tech specs except for having a 48MP + 16MP + 2MP triple rear camera, a 4300mAh battery without wireless and reverse wireless charging feature, supports 90Hz refresh rate, and finally, it doesn't have any IP rating.

Even though OnePlus is no longer the flagship killer we know, but their devices are still on par with many flagships. So expect the prices to be more expensive than usual, and stay tuned for more OnePlus news at TechNave.com.