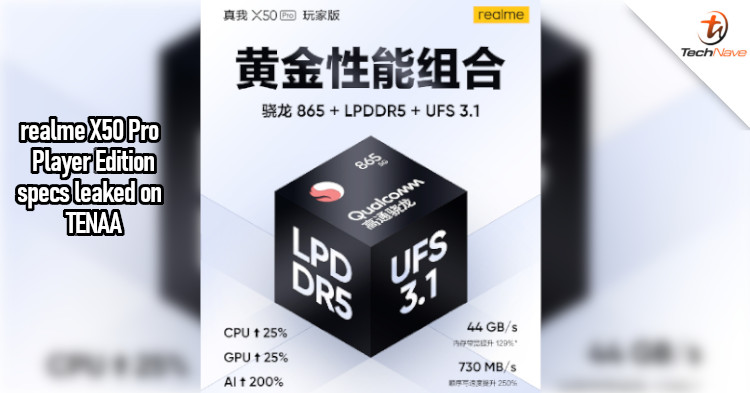 Recently, unofficial sources reported on the specs and price for the realme X50 Pro Player Edition. The phone is expected to launch on 25 May 2020, so it's not surprising that details of it are already being leaked. But now an official certification listing for the realme's upcoming gaming-centric smartphone is out.

In the previous leak, we found that the realme X50 Pro Player would come in silver colour. But the newly revealed TENAA listing also shows an image of the phone in red colour, though the info for colour states that it'll be available in silver and black. Additionally, we get confirmation on most of its core hardware specifications. It's expected to have a CPU running at 2.8GHz, up to 12GB of RAM, and 512GB of internal storage.

The official realme Weibo account also gave more details in regards to the hardware. It's been confirmed that the Player Edition will come with the Snapdragon 865 chipset, LPDDR5 for the RAM, and UFS 3.1 for the storage. Moreover, it'll have 200% more antennas compared to a standard 4G smartphone.

From what has been revealed so far, it looks like the chipset, RAM, and storage for the realme X50 Pro Player Edition would be much better than the normal Pro variant. Would it still be able to maintain the rumoured price of 3299 yuan (~RM2021)? What do you think? Let us know on our Facebook page and stay tuned to TechNave.com for more updates.