Current Location: Home > News > The iPhone 11 is the most shipped smartphone of Q1 2020 breaking its own record Back in early May, we reported on how Apple, Xiaomi and Samsung dominated the global top 10 smartphones in Q1 2020. It was first reported by Canalys, showing the iPhone 11 holding the top spot and this is further backed up by Omdia with another their own top 10 models in global smartphone shipments.

Comparing the two reports, both are actually more or less the same with a few familiar names such as the iPhone 11 series, the Xiaomi Redmi Note 8 and  Redmi Note 8 Pro but what's surprising is that the Samsung phones that are in the list aren't the flagships (with the exception of the Galaxy S20+ 5G). Compared to the Q1 2019 shipments, at least the Galaxy S10 and S10+ have a total of 10.3 million shipments together. One might point the current pandemic as one of the causes, but Apple's shipment figure says otherwise. 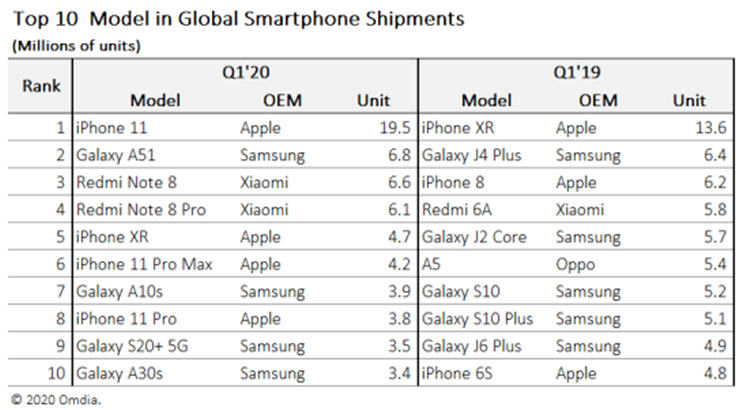 In fact, compared with the iPhone XR shipments in Q1 2019, the iPhone 11 shipments is 6 million more than the former (13.6 million) with 19.6 million units. As Omdia puts it, the current pandemic didn't seem to put a dent on Apple and that certainly says a lot. The company also noted that this is Apple's first major improvement as the iPhone XS and XS Max didn't make it to the Q1 2019 top 10 shipments. The sweet spot in setting the price slightly cheaper than the iPhone XR and offering more tech features was also one of the main attractions.

So what do you think? And were you surprised by the result? Let us know on our Facebook page and stay tuned for more trending tech news at TechNave.com.