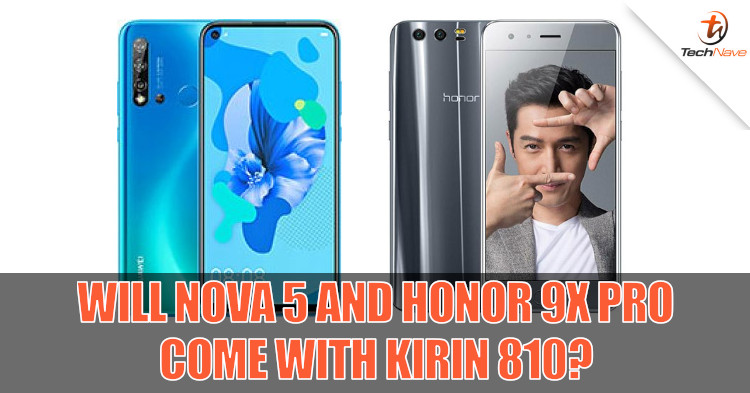 Head of Huawei’s smartphone division He Gang, has confirmed on Weibo that the Huawei Nova 5 will come equipped with a 7nm chip. This could mean that the Huawei Nova 5 could either come fitted with the familiar HiSilicon Kirin 980 chipset or even a newer Kirin 810 which was originally planned to be released alongside the Nova 5.

As far as what we know, the tech specs of the aforementioned device will include either one of the chipsets mentioned above, up to 8GB of RAM, up to 128GB of ROM and 3500mAh non-removable battery. There’s also a 48MP + 12MP + TOF 3D camera sensors in the rear, 25MP front-facing selfie camera, as well as a 6.39-inch display with a screen resolution of 1080x2340 pixels.

This is second device which uses new Kirin 810 soc

On another note, there was a tweet by Twitter user @RODENT950 which includes the potential tech specs the HONOR 9X Pro could come with. These specs include the Kirin 810 chipset, up to a 6.7-inch display, quad camera system with 48MP + 8MP + 2MP + 2MP sensors and a 25MP front-facing selfie camera.

Do take every bit of information with a grain of salt, as there is no official news from Huawei regarding the rumours mentioned. Also, there is no information on the Malaysia release dates and price of the the Nova 5, as well as the HONOR 9X Pro. Stay tuned to TechNave.com as well as our Facebook page, as we provide more updates on the smartphones mentioned.