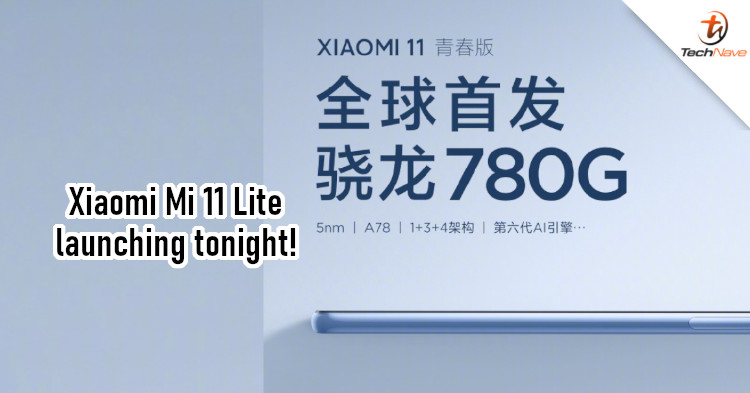 If you recall, some renders of the Xiaomi Mi 11 Lite was leaked last week. Allegedly, it's going to have a 4G variant with the Snapdragon 732G chipset. But that's not all, as the company has confirmed a 5G variant that will launch tonight.

According to the announcement, the Xiaomi Mi 11 Lite will be the world's first smartphone to feature the Snapdragon 780G 5G. Launched a few days ago, this 5nm mid-range 5G chipset comes with a new 6th-Gen Qualcomm AI Engine. Speaking of 5G, it uses the Snapdragon X53 5G modem to deliver up to 3.3Gbps of download speeds and supports sub-6 GHz.

In terms of tech specs, the chipset has an 8-core CPU (1+3+4) with a max clock of 2.4GHz and an Andreno 642 GPU. As for features, it can support simultaneous image capture via three cameras, a display refresh rate of up to 144Hz, and under-display fingerprint sensors. The phone's features haven't been revealed though, so look forward to the launch tonight.

Having said that, what do you think of this Lite variant? Would you be interested in getting this over the Pro or Ultra variants? Let us know in the comments, and stay tuned to TechNave for the full launch report tonight.