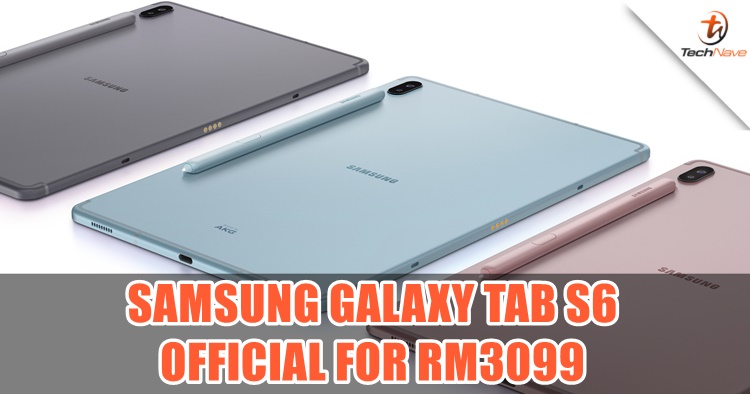 Besides the Samsung Galaxy Fold pre-order news, Samsung Malaysia also brought in the Galaxy Tab S6 and it is available starting today for RM3099. It can be purchased now at all Samsung Experience stores and Samsung Authorised Dealers nationwide.

Available in Mountain Gray, Cloud Blue and Rose Blush, there is an on-going promotion of the Tab S6 Book Cover Keyboard. For those who want an extra accessory, customers can just top-up RM200 to get the keyboard which is worth RM699 only. That's a pretty good deal if you ask me. The promotion will end on 31 October 2019. Initially introduced in early August 2019, one of the featured highlights is the S Pen. Besides writing and drawing, users can utilize the S Pen Air actions with hand gestures controlling the tablet on certain tasks. To add on, it has a wireless charging feature that can deliver up to 10 hours of battery life after just 10 minutes of charging.

To learn more about the tablet, you can check out our news report here or head over to Samsung's official webpage. Stay tuned for more Samsung news at TechNave.com.