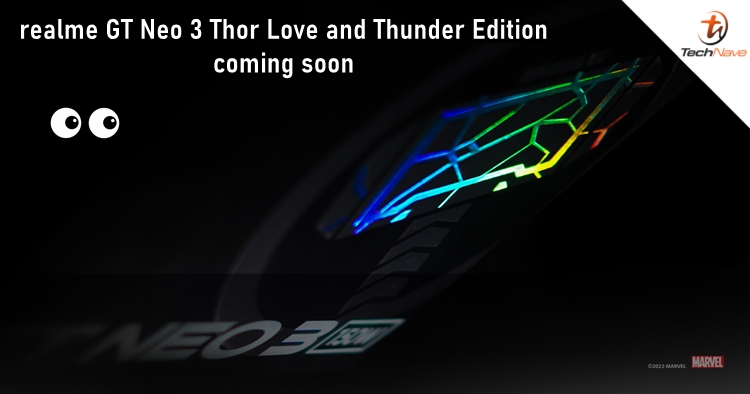 The realme GT Neo 3 is getting another special edition after the Naruto-themed design. This time, the company has collaborated with Marvel for a Thor Love and Thunder Edition of the GT Neo 3. Not only that, but it'll also have a tech spec upgrade, which is a 150W fast-charging.

The information came from the realme Vice President Madhav Sheth. He posted a blurry picture of the device on Twitter, but it's still clear enough to see the name and also its fast-charge capacity. According to the source, the device is scheduled to debut on 10 July to celebrate the film's release in India. It's worth mentioning that this is not the first time realme worked with Marvel on a special edition phone. Previously, they had partnered for the launch of realme X Spider-Man Edition in 2019.

Thunder is all set to strike once again pic.twitter.com/gB0dgfYiOe

We can expect the realme GT Neo 3 150W Thor Love and Thunder Edition to offer similar tech specs as the regular variant. To recap, the device features a 6.7-inch FHD+ AMOLED display with a 120Hz refresh rate and an integrated fingerprint scanner. It also has a triple camera setup of a 50MP Sony IMX766 sensor with OIS support, an 8MP ultra-wide-angle lens, and a 2MP macro unit. Besides that, it gets powered by the MediaTek Dimensity 8100 processor paired with up to 12GB RAM and 256GB storage.

What do you think about the collaboration? Drop a comment to let us know your thoughts, and stay tuned to TechNave.com for more smartphone news.