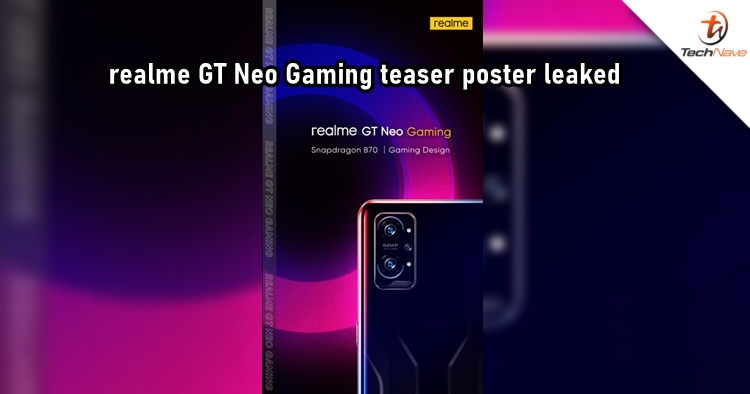 The realme GT series is an emerging smartphone series in 2021. After launching the first realme GT in March, the brand continued to drop the more affordable realme GT Neo later in the same month. Now, it looks like realme is ready to take it to the next level by presenting the GT Neo Gaming with Qualcomm Snapdragon 870 soon.

Tipster Rudhra Nandu posted a teaser poster of the upcoming device alongside some tech specs and the expected prices. It appears that the realme GT Neo Gaming would sport a triple camera setup with a 64MP sensor. For the design, you can see some lines on the back of the device that shout "gaming smartphone".

This is not the first time for the realme GT Neo Gaming to show up on the Internet. Earlier, the device with model number RMX3370 was spotted on TEENA, revealing that it will have a 6.62-inch AMOLED display with FHD+ resolution. Furthermore, there could also be a punch-hole design, an in-screen fingerprint sensor, 16MP front-facing camera, Android 11 OS and more. The device is likely to feature a 2,465mAh dual-cell battery that offers a total of 5,000mAh capacity too.

Are you excited to see the new realme GT device? Leave some comments to let us know what you're thinking! Stay tuned to TechNave.com for more smartphone leaks.