Current Location: Home > News > realme Malaysia is bringing in a realme 6 variant with 8GB of RAM and 128GB ROM 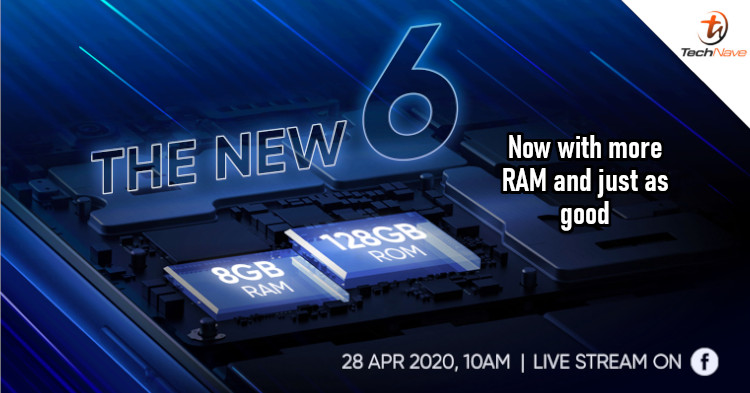 Don't you hate it when your apps automatically close when you switch back to it? This happens a lot with phones that have less RAM. That's why when realme Malaysia launched the realme 6 with only 4GB of RAM, people began requesting for a variant with more RAM. Fortunately, the company decided to heed the fans and will be bringing in the variant with 8GB of RAM to Malaysia soon.

Besides the extra RAM, the realme 6 also houses the Helio G90T chipset from MediaTek, a large 4300mAh battery, and a 6.5-inch display with 90Hz refresh rate. It also has a quad rear camera featuring a 64MP main camera, 8MP ultrawide lens, 2MP black & white camera, and 2MP macro camera. On the front is a 16MP punch-hole camera, which does light animation whenever you switch to it.

Of course, this does mean that the new variant will probably cost more than RM999. But it probably won't be by much so it's still a good deal. realme Malaysia will be launching it officially on its Facebook page on 28 April 2020 (10 AM), so stay tuned to our Facebook page and TechNave.com as we'll be following the launch live!