Current Location: Home > News > Huawei has given a response to Google's decision to suspend businesses the two Huawei has responded on their Facebook page, regarding Google’s decision on suspending business activities between the two tech giants. As previously mentioned, Google’s call to cease all operations with Huawei was based on the premise that the company has been blacklisted by the US government.

That being said, Huawei has given a statement on the suspension stating that Huawei has made substantial contributions to the Android ecosystem which has benefitted users all around the globe. They will continue providing support including security updates, as well as after sale services for existing users of their devices. 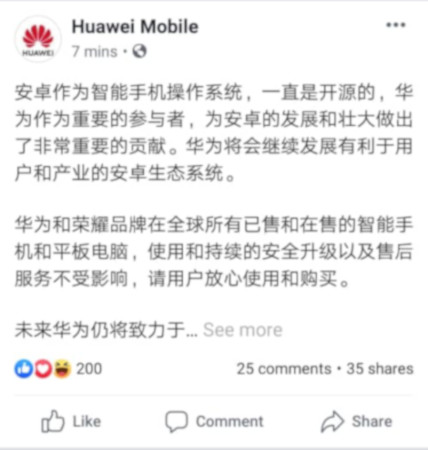 In our opinion, everybody shouldn’t be too worried about this for now as Huawei is currently working on a solution to issue. Who knows? With careful negotiations, the trade suspension between the two could be lifted. For more updates like this, stay tuned to TechNave.com.

[Update]: For those not in the know, Huawei have since responded with a statement of support and we’ve explored many of the possibilities for the future. In addition, the US have also made a U-Turn, but to stay up to date with all the latest news, feel free to download our new TechNave APP 2.0 for Android and iOS.