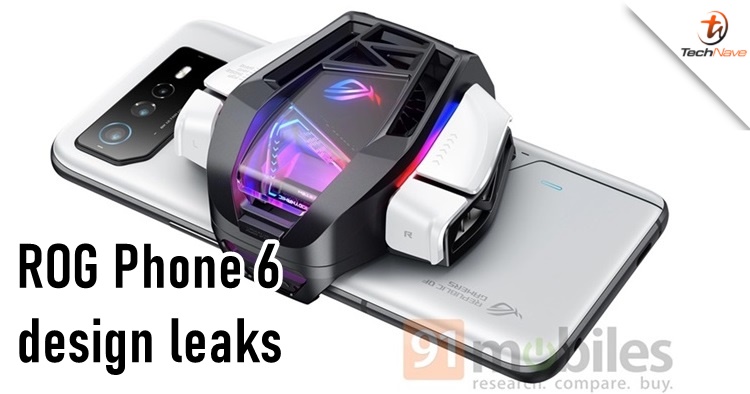 Ever since the first generation, the ROG Phone's fan accessory has been an integral part of the phone. It also got bigger and fatter with each new generation and in this latest leak, it seems that ASUS is going the extra mile of giving us a super fancy fan on the ROG Phone 6.

We got more render image leaks again thanks to 91mobiles.com and had a good look at the humongous fan accessory. Looking at the image, it's more colourful than before and appears to have four physical buttons in total for extra buttons in gaming. It's so big that the accessory covers up the whole rear design of the phone. This new leak is also quite consistent with the previous rumours, showing a slightly different change from its predecessor. The LED bar has been moved to the right side and presumably, we think it should show incoming notifications from calls, messages and others. Sources believe that there should be a black variant as well.

In addition, rumours have it that the ROG Phone 6 could feature up to 18GB of RAM, up to 512GB of storage, 6000mAh battery with 65W fast charging and a built-in audio jack. So far, ASUS has confirmed that the phone is equipped with IPX4, a 165Hz refresh rate and an improved vapour chamber cooling system. The ROG Phone 6 will have its debut on 5 July 2022 at 8 PM, so be sure to check out the livestream on Facebook and YouTube if you're free. Stay tuned for our official news coverage at TechNave.com.