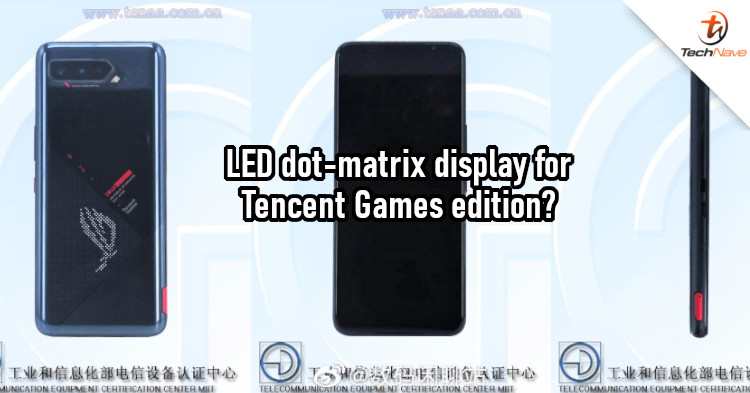 There have been a few news on the next gaming phone from ASUS recently. Allegedly, the company could skip a number and name it the ROG Phone 5. Some live photos and specs of the phone have been leaked lately, but now some official sources have certified it.

We now know (via Digital Chat Station) that the ROG Phone 5's images have been officially recorded by China's MIIT (aka TENAA). Interestingly, the back design here is different from the one seen previously. Instead of the small secondary notification screen, there's an LED dot-matrix display like the one from last year's ROG Zephyrus G14. This should be the Tencent Games variant that we've been hearing about.

The leaker also mentioned that the ROG Phone 5 will have a larger 6.78-inch OLED display with a 120Hz refresh rate. It will also have the Snapdragon 888 chipset, 60W or 65W fast-charging, and a 5960mAh (typical capacity) dual-battery. He also mentioned specs for the Black Shark 4, which is expected to have a 6.67-inch OLED high refresh rate display, Snapdragon 888 chipset, 120W fast-charging, and dual-battery at 4500mAh capacity.

We're not sure if this would be a trend, but more companies are going with the dual-battery setup as fast-charging speeds increase. Having said that, what do you think of the specs of these upcoming gaming phones? Is there a particular feature you would like to see added to them? Let us know in the comments below and stay tuned to TechNave for more news like this.