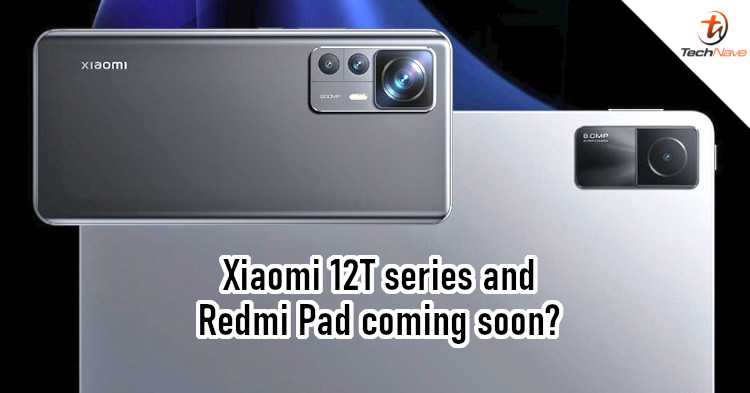 Early last week, Xiaomi confirmed that it plans to bring the Xiaomi 12T series to Malaysia. The Xiaomi 12T and Xiaomi 12T Pro appeared in SIRIM's database, so all that's left is the official launch. But a leaked render suggests that the Redmi Pad could also come soon.

A render of the Xiaomi 12T Pro and Redmi Pad leaked recently, showing off the back of the device. While it's faint, you can see the label '200MP' on the smartphone and '8MP' on the tablet. In other words, the Xiaomi 12T Pro will be the next smartphone to feature a 200MP main camera. It could also feature the Snapdragon 8+ Gen 1 chipset, a 6.67-inch AMOLED 144Hz display, a sizable 5000mAh battery, and 120W fast charging.

As for the Redmi Pad, we first spotted rumours for it back in May. Sources suggest that the company will name it the Redmi Pad 5G, meaning it would be a 5G device. Allegedly, it could also be a cheaper Xiaomi Pad 5. But if the 8MP main camera is any indication, it's more likely cheaper because it has lower specs.

Mind you, there haven't been any details from official teasers yet, so do take the news with a grain of salt. Anyway, are you hyped for the Xiaomi 12T series and Redmi Pad? If you plan to get them, do let us know why in the comments below. Also, stay tuned to TechNave for further updates on these devices.