Current Location: Home > News > Take a look at the design of Xiaomi Mi 10 series ahead of its launch After the Xiaomi Mi Note 10 series was crowned as the best camera by DxOMark last year, many of you must be waiting for Xiaomi to move on to the next step, which is to launch the Xiaomi Mi 10 series. Now, the design of the smartphones has surfaced online and revealed the colours and some tech specs of the devices. Come find out what they are and do they really match the rumours that came out earlier. 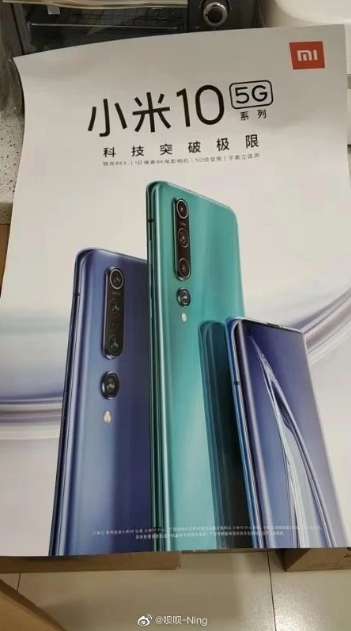 On the poster, the small Chinese texts have confirmed some of the tech specs we’ve been expecting from the devices as well. The devices are going to come with Qualcomm’s Snapdragon 865 chipset and camera features like the 8K videography and 50x hybrid zoom. We can also expect the world's first low-power DDR5 DRAM to be in the device too, as Micron has confirmed going into the mass production stage.

At the front, the devices look like they’re going to have the same curved screen design with a punch-hole cut-out front camera. Earlier, we’ve also heard that the devices’ screens are featuring a 120Hz refresh rate for smooth display, hope it is still true. For security, the Mi 10 and Mi 10 Pro will both have an in-display fingerprint sensor.

Other than that, we still have to wait for the launch event to happen so the other rumour like the 66W fast charging technology can be confirmed. Although Xiaomi didn’t reveal any information for the launch event yet, it is still being said that the smartphones will be made official on 11th February 2020 with an online live conference event.

Share with us your opinions about the looks of the new Xiaomi Mi 10 series smartphones on our Facebook page. Stay tuned to TechNave.com for more smartphone leaks.