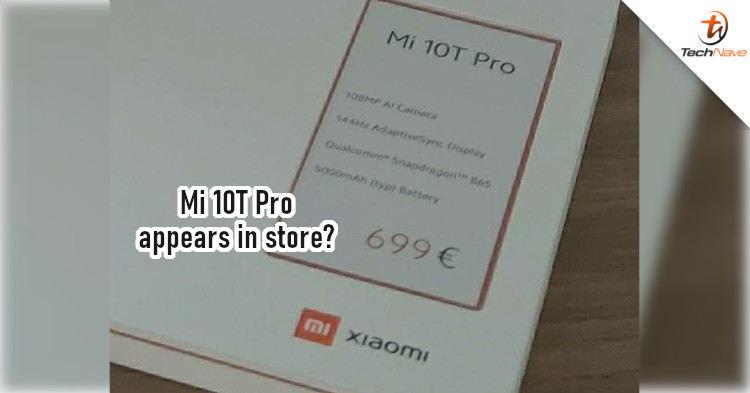 It would seem that Xiaomi wants to launch its upcoming Mi 10T and Mi 10T Pro smartphones soon. We've been seeing several rumours and leaks of the two, especially the Mi 10T Pro recently and a new even appeared earlier today. This new leak shows a display card listing down some of the tech specs and pricing of the Mi 10T Pro.

According to Ice Universe, the Mi 10T Pro key tech specs include a Snapdragon 865 chipset, 5000mAh battery, and a 108MP main rear camera. It's also expected to have a display with a refresh rate of 144Hz and AdaptiveSync. These specs are the same as the ones found previously, which also say that the phone will have 8GB of RAM, up to 256GB of internal storage, and that the display would be a decent size at 6.67-inch.

Mi 10T Pro specifications leak, 108MP+865+5000mAh, and more importantly, it uses a 144Hz adaptive refresh rate LCD screen. This is the first time we have seen it. The price is 699 Euros and it is very competitive. pic.twitter.com/aT7GvRI0bV

In terms of cameras, the 108MP camera here could be a periscope camera due to the size shown in leaked renders. We can also expect a 20MP and 12MP camera, along with what seems to be a depth sensor and the LED flash. The front camera should be a 20MP sensor, which should be more than enough for selfie shots with a lot of detail.

Lastly, the leaked price for the phone is 699 Euros (~RM3415). But to be honest, converting from USD699 (~RM2893) will probably give us a more accurate estimation of possible price in Malaysia. Assuming the price listed is accurate, would this be a phone you'd buy? Let us know in the comments below and stay tuned to TechNave for further updates.