Xiaomi CEO Lei Jun to give a public speech for 10th anniversary, could reveal new products 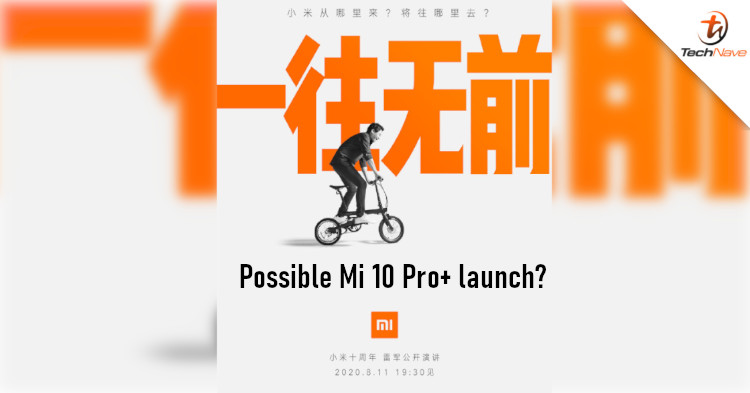 There have been a few rumours about Xiaomi lately, claiming that some a new smartphone, smartwatch, and TWS earphone would be on the way. It's unclear if these are true, but Xiaomi CEO Lei Jun is going to give a public speech for the company's 10th anniversary soon.

According to Xiaomi on Weibo, Lei Jun will be conducting his speech on 11 August 2020 at 7:30 PM (Malaysia Time). The speech will be live-streamed, with the CEO expected to give an overview of what Xiaomi has done in the last 10 years and the company's direction for the future. It's believed that he will also take the opportunity to unveil new products at the event.

Is this almost an official announcement? Several new phones and new products including the Mi 10 Series Super Cup are scheduled to be released on August 11 [吃瓜]

Speaking of the new products, the one that people are anticipating to see is the rumoured Xiaomi Mi 10 Pro Plus. The device in question allegedly scored over 680k on AnTuTu benchmark recently. On the same day, Lei Jun talked about how he hasn't done a product reveal in a long time on his Weibo. Well-known leakers like Digital Chat Station believe that these hints strongly suggest a possible upcoming launch for the phone.

Of course, the above is merely speculation and Xiaomi could still decide to hold a product launch on a separate day, so do take what's been written with a grain of salt. But what do you think? Is it not so subtle hint at a product launch after all? Let us know what you think on our Facebook page and stay tuned to TechNave.com for updates on this.