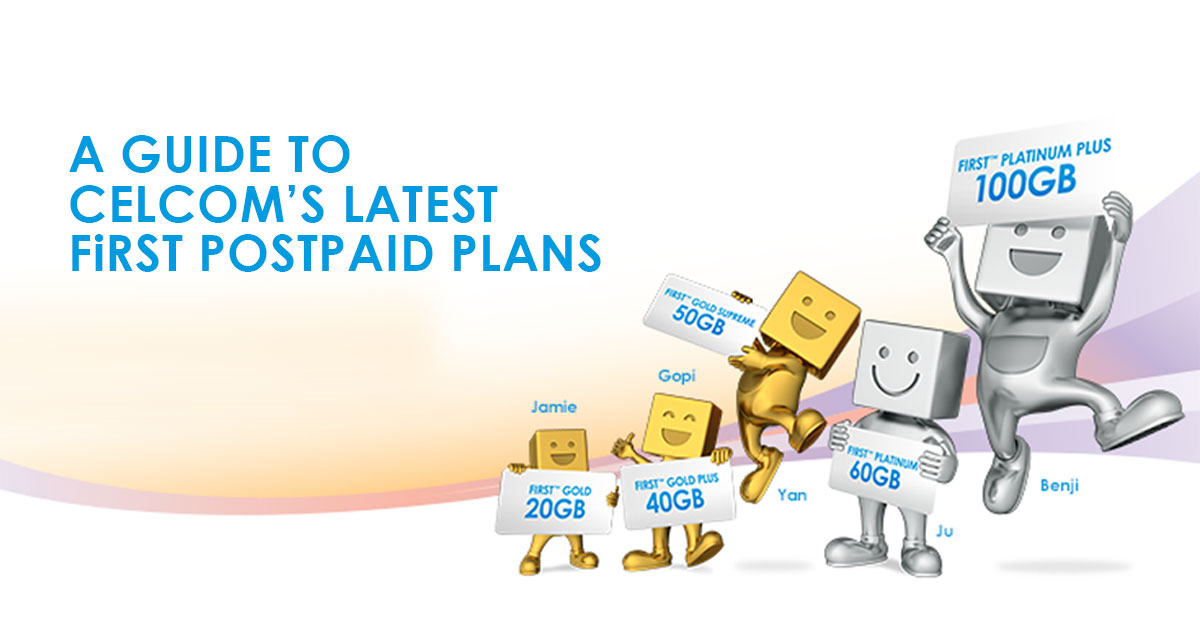 Some of you have probably heard of Celcom's newest, craziest and biggest plans. Yup, we are talking about the latest FIRST Gold Supreme and FIRST Platinum Plus postpaid plans that we covered a few days ago which is offering everyone 100GB and 50GB worth of Internet data and more.

With all the bombardment of different telco plans these days, it can be confusing for a consumer on which plan to sign up for. To continue catering to the needs of Malaysians' daily mobile behavior these days, Celcom has come up with 5 plans to give you what you want including benefits such as Unlimited WhatsApp and WeChat, Unlimited Calls to all networks, FREE Yonder Music and FREE Video Walla.

Perhaps the best part of signing up for one of the plans is that you actually get a free phone as well (while stocks last). Below is the table of what each plan offers:

What FREE Phones and more can you get with the FIRST Platinum Plus?

Designed for the ultimate online content user, the FIRST Platinum Plus plan (Benji), looks to offer all the Internet you could need with 100GB of Internet data and 100GB of FREE Video Walla with no strings attached. Considering that most home family Internet plans are only 90GB and below, this is the plan for the online gamer, the Ultra High Definition movie watcher and the person who never gets enough Internet over Celcom's high-speed networks.

Here are the FREE phones you can get with the FIRST Platinum Plus:

Next, the FIRST Platinum (Ju) remains the same as before when Celcom announced the upgraded Internet data plan last October. Packing 60GB worth of Internet data, it is split in half for 30GB of weekday and 30GB of weekend usage. There's also a load of 30GB FREE Video Walla along with unlimited Yonder Music. Although it's not as much as the FIRST Platinum Plus, it's still more than enough Internet data for a user who doesn't need to stream "that much" HD video content or likes to listen to a lot of songs.

These are the FREE phones that "Ju" can get for signing up with FIRST:

On the other hand, FIRST Gold Supreme (Yan) is one of the latest additions to the Celcom postpaid plan line up. Just for RM128, this plan is just a slightly a lesser version of FIRST Platinum, coming with 50GB Internet data (again, 25GB for weekday and weekend respectively), 25GB Internet data for FREE Video Walla, unlimited Yonder Music, Whatsapp, WeChat and calls to every network. However, the user will have to pay 20 cents per SMS.

There are 5 FREE phones you can get in this plan too:

If RM128 is a bit too much for you, then maybe the FIRST Gold Plus (Gopi) will be just fine. Like the FIRST Platinum, the FIRST Gold Plus is still the same as before but with some limitations such as the extra charges for SMS (20 cents), as well as the unavailability of Video Walla. This plan is good for users who don't really watch many videos on their mobile phones, plus you still get unlimited Yonder Music, Whatsapp, WeChat and calls to every network.

Also, the only FREE phone you can get with this plan is the Samsung Galaxy J3 Pro.

Last but not least, FIRST Gold (Jamie) offers Internet data of 20GB (10GB for weekday and weekend each). Designed just for those who aren't keen on video streaming, FIRST Gold provides all this for RM80 along with all the free unlimited features like Yonder Music, Whatsapp and calls to every network, making this perhaps one of the most value-added postpaid plans in Malaysia. Unfortunately, there is no free phone to offer if you sign up for this, but it is still a good plan nonetheless.

To find out more about Celcom's all-in-one postpaid plans, head over to their website here or their nearest BlueCube stores for more information.