Current Location: Home > News > AMD's upcoming flagship GPU could outperform a RTX 2080 Ti by up to 50% 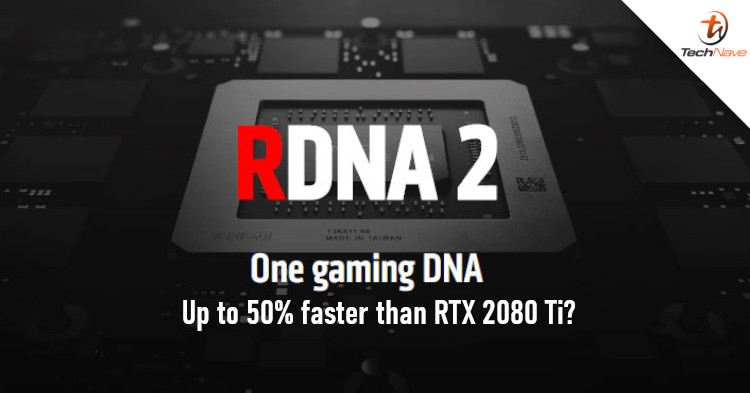 The desktop GPU war is expected to heat up again in late Q3 2020. Nvidia and AMD are expected to launch new graphics cards based on new GPU architecture, with both camps likely to outdo the current king of the hill - Nvidia's GeForce RTX 2080 Ti. But rumours seem to indicate that AMD might have an edge this time with its upcoming Big Navi GPU.

According to Moore's Law Is Dead, the flagship model for AMD's upcoming RDNA2-based GPU (nicknamed Big Navi) will outperform the GeForce RTX 2080 Ti by 40-50%. He estimated this based on the belief that RDNA2 has more than 10% improvement in IPC (Instructions Per Clock) compared to RDNA and more efficient compute units. In comparison, one of Nvidia's top-tier Ampere-based GPU is expected to outperform the RTX 2080 Ti by about 31%.

Other rumoured tech specs for Big Navi include there being up to 72 or 80 compute units, 5120 stream processors, and a whopping 17.5 TFLOPs of compute performance. For reference, the Sony PS5 and Microsoft Xbox Series X that use customised versions of the RDNA2 GPU output about 10.28TFLOPs and 12TFLOPs respectively. If all this information is true, then AMD will have finally caught up to Nvidia in the GPU segment.

If you own an Nvidia GeForce RTX 2080 Ti card, it may be a good idea to cash in on it now. You could use the money to buy a new card from Nvidia or AMD that'll perform just as well at a more affordable price. Food for thought, huh? Of course, a lot of the above is guesswork and rumour so do take them with a grain of salt. For more updates on the next-gen of graphics cards, make sure to stay tuned to TechNave.com.