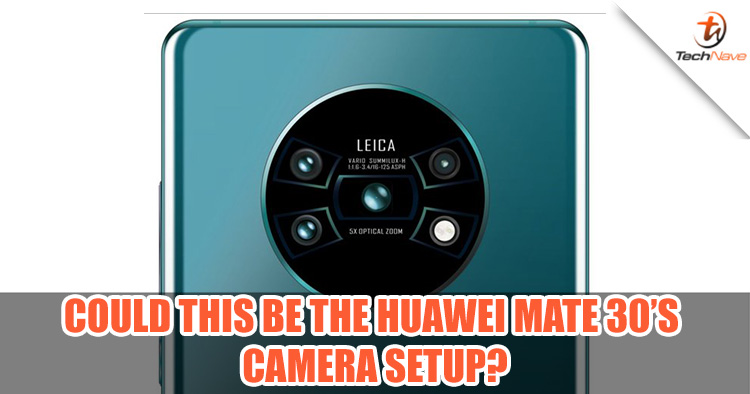 A few days ago, we reported the circular setup for the Huawei Mate 30 smartphone. The cameras were placed on the sides, top and bottom of the setup with the LED flash right below the bottom lens. Now a new render has emerged showing the same circular setup but the lenses are now arranged in an X.

The LED flash has been moved to the bottom right of the X setup while the lenses are placed on the other 3 points of the X as well as the middle which we can assume is the main sensor. Not a lot information on the Huawei Mate 30 such as tech specs and features have been released. However, according to reports, the device may be powered by the Kirin 985 chipset and the Barong 5000 5G chip. It is also rumoured that the device may feature a 90Hz AMOLED display. As for its camera, we can expect to see a similar setup to the Huawei P30 Pro with 5x optical zoom and 50x digital zoom.

Make sure to inhale this article with an extra load of salt as no official announcements have been done by Huawei thus far. We’re still a ways away from the official release but we’ll be keeping you updated with any rumours and leaks in regards to the device. Now that things are looking a little better for Huawei, would you be buying this device? Keep up with the latest Huawei news on TechNave.com!