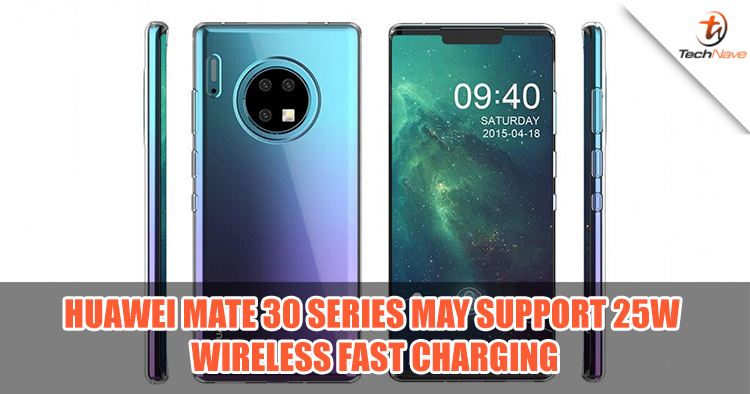 As the next anticipated flagship from Huawei, the Huawei Mate 30 series has had many, many rumours surrounding it. The latest one speculates that the upcoming device may feature 25W fast charging support, which is honestly impressive. If true, this puts Huawei’s fast charging ahead of Xiaomi’s 20W fast wireless charger.

However, it has been reported that a 30W fast charger has passed through the FCC yesterday - 5W more than the rumour above mentioned. Unfortunately, the charger couldn’t meet  the requirement for a 30W output and the application wasn’t fully approved. Huawei may have been hoping to have a 30W fast charger ready for the Mate 30 series or just settle with 25W. Either way, this puts Huawei ahead of other competitors when it comes to wireless fast charging. Other than that, a brand new leak of a case for the Mate 30 Pro series has also emerged, matching previous leaks. It shows a circular module on the back with a long cutout on the top left for sensors and speakers. On the bottom is a cutout for the USB-C and on top are two holes for the IR blaster and mic. The camera for the Mate 30 series has been sounding extremely interesting with Cinelens as well as a rumour that the lenses may be "Liquid Lenses". Of course, we can expect better low light photos with the smartphone as well.

If all these rumours about the Huawei Mate 30 series is true, this could shape up to be an extremely scary rival against the Samsung Galaxy Note 10 series. What do you think? Keep up with the latest Huawei news and leaks on TechNave.com!