OPPO Reno4 series has been confirmed to launch on 5 June 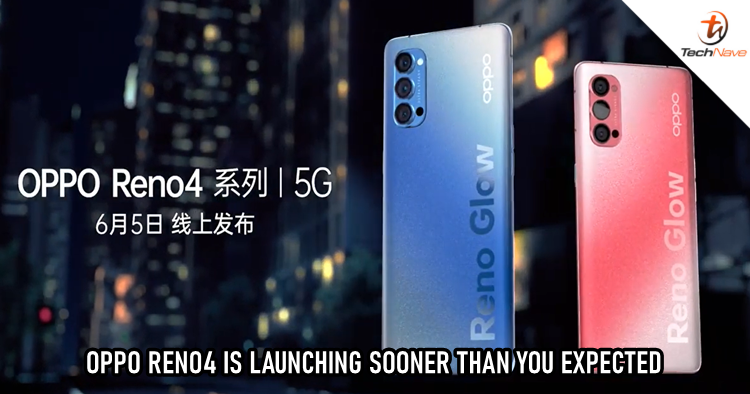 Earlier, rumour has come saying that the OPPO Reno4 series will be coming soon and we were so curious since the Reno3 series has only been launched earlier this month. However, OPPO has posted on Weibo today confirming that the Reno4 series will indeed be launched on 5 June in China with Reno4 and Reno4 Pro. This shows us that OPPO is trying to be different from others by launching smartphones in such a short time frame.

Before the launch event happens, the design of the devices has been revealed as well in a teaser. In the video, we can have a look at the front of the Reno4 Pro that comes with a single punch-hole cutout which houses a 32MP shooter. The Reno4 is said to come with two front-facing cameras including a 32MP sensor and a 2MP one, but it wasn't being showcased in the video. Until here, you might ask why the Pro variant will come with only one front-facing camera while the vanilla version will have two, and that is a question which we would also like to know.

To recap, the standard Reno4 is said to sport a 6.43-inch FHD+ Super AMOLED display with a triple-camera setup at the back (48MP main + 8MP ultrawide lens + 2MP depth sensor), while the Reno4 Pro will sport a 6.5-inch FHD+ S-AMOLED display with a different setting for its triple-camera setup (48MP main with OIS + 12MP low-light video sensor + 13MP telephoto sensor). Both of them will be powered by Qualcomm Snapdragon 765G chipset and have a 4000mAh battery that supports 65W fast charging technology. They will also run Android 10 with ColorOS 7.1 out of the box.

Let us know what you think about the upcoming Reno4 series on our Facebook page. Stay tuned to TechNave.com for more exciting smartphone news.