Rumours: A variant of Huawei Nexus 6P appears with a Snapdragon 820 and 4GB RAM

Previously, we mentioned about two possible upcoming Nexus device from HTC, but apparently an unreleased version of the Huawei Nexus 6P  was also spotted on GeekBench earlier, revealed new tech specs which include a Snapdragon 820 processor clocked at 1.59GHz and 4GB of RAM. The device is running the latest Android N version too. 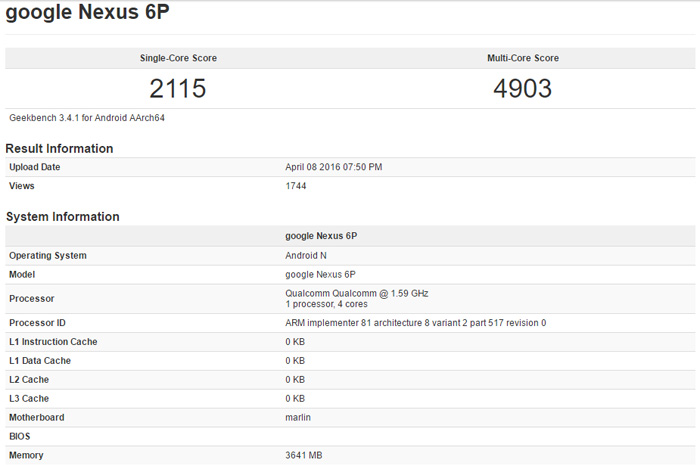 But for some reason, this unreleased Nexus 6P is running with a motherboard name "Marlin". However, the Nexus model codename Marlin is supposed to be produced by HTC based on our earlier rumours. If the previous rumours are correct, it looks like HTC will be releasing a new variant of the Nexus 6P instead of Huawei.

It seems pretty unlikely for that to happen, though. It is not like Huawei will just pass the baton to HTC for them to improve the Huawei-made Nexus 6P device. To be frank, the Nexus 6P made by Huawei is already a great device, and fans could prefer to have Huawei release a refreshed model instead.

Nevertheless, these are still just rumours and speculations so take them with a pinch of salt. In addition, the Google I/O conference is not that far off. The keynote is scheduled to be on 18 May 2016, so let's just wait for the conclusion there and see what Google and Huawei or HTC have in store for us.