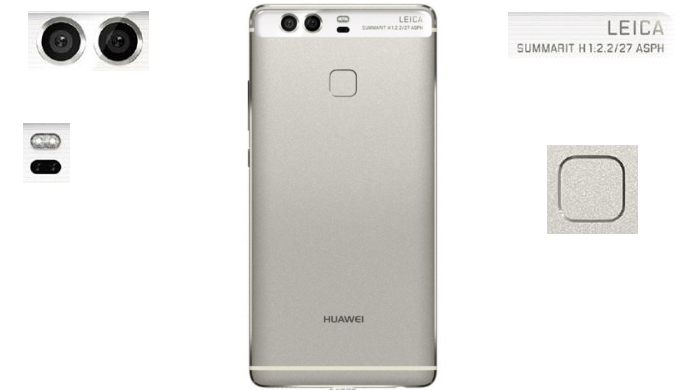 It isn't a secret that Huawei and LEICA have made a partnership, the only question would be when or for which device. From this leaked image it looks like this could be the upcoming Huawei P9. Set for a 6 April 2016 announcement, this leaked image clearly shows the LEICA logo with a SUMMARIT and f/2.2 aperture and 27mm focal length on the strip where the camera is located, along with dual cameras, what appears to be dual laser autofocus sensors and a finger print sensor below it. But then again, these do not match with previous leaked images.

So far, other tech specs have yet to be confirmed but current rumours say the P9 may come with a Huawei Kirin 955 processor, 4GB RAM and a 5.2-inch display 1080 x 1920 full HD pixel resolution. This jives with the previous Huawei P8 release which saw the Kirin 930 being used, one step above the Kirin 925 processor in the Mate 7. Rumours indicate that the Huawei P9 Lite, P9 Max and P9 Enhanced edition could get announced as well, but from previous experience with the P8 we expect the release dates for each to be different. No Malaysia release dates or pricing details yet but we should find out more after Wednesday. As usual, take this rumour with a pinch of salt.