If you missed out the pre-order of the Samsung Galaxy Note 9, don't fret because starting today (24 August 2018) onwards, the phablet is now officially in all Samsung Experience Stores, authorized resellers and partners across Malaysia for the same starting price of RM3699. Also starting from 24-26 August 2018 (or 27 August for Suria KLCC, Kuala Lumpur), there are several roadshows showcasing the phablet.

At a recommended retail price of RM3699 and RM4599 for the 128GB and 512GB models respectively, the Galaxy Note 9 is available in Midnight Black (both 128GB and 512GB) and Metallic Copper (128GB) with matching S Pen colours, and Ocean Blue (128GB) with a Yellow S Pen. If you're one of the first 1000 customers who purchase the new phablet at the roadshow, you will have a free gift that includes a Samsung Screen Protection Plan, Wireless Charger Pad and exclusive Selfie stick worth a total of RM515. On top of that, you can also get an instant cash rebate of RM999 if you decide to purchase a second Galaxy Note 9. 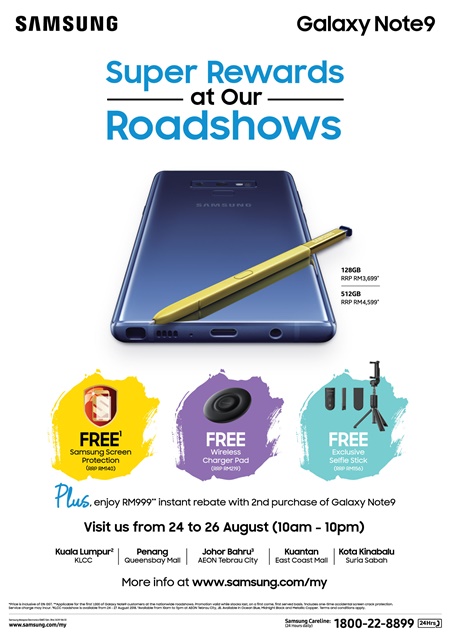 In addition to that, there will be some local celebrities making an appearance at Suria KLCC Kuala Lumpur roadshow this weekend. Below are the details of the roadshow locations and time slot for the special guests:

For more information about the Galaxy Note9 roadshow, you may visit the website here to check it out, as well as the full specifications and features about the phablet from our coverage from New York. Stay tuned for more Samsung news at TechNave.com.