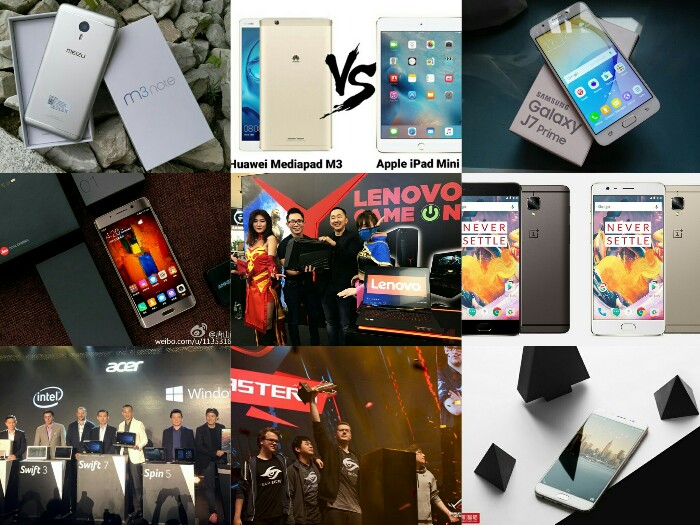 While there wasn't any clear big event or device this week, the sheer number of announcements was huge with Vivo announcing their V5 (set for an official announcement in Malaysia next week) along with their X9, X9 Plus and XPlay 5 devices. The more powerful OnePlus 3T got announced rather quietly alongside the downgraded Huawei Mate 9 Lite while Huawei also announced the Huawei Mate 9 Pro for China.

Acer announced the world's thinnest laptop with their Acer Swift 7 and other Acer stuff like monitors while Lenovo announced their Y710 Cube CPU, a Lenovo League of Champions tournament and ESL One Genting Partnership. Also in gaming news, Team Secret and the MongolZ won the ASUS RoG Masters Grand Final, while Sony have cut the pricing for their Xperia XA and XA Ultra smartphones.

BlackBerry announced the DTEK60 smartphone for Malaysia (and we have it on hand for an upcoming review), while Honor Malaysia opened up their first Concept Store here. The Huawei Mate 9 will be coming to Malaysia soon for RM2699, and Samsung Malaysia announced their Lazada store for Malaysians.

Oukitel announced their dual rear camera offering with the U20 Plus, while ASUS is set to showcase Augmented Reality smartphones in next year's CES2017. Set to appear in the next generation of high-end smartphones is the Qualcomm Snapdragon 835 which was also announced recently.

Digi have weighed in as well, revamping their broadband plans. Maxis rounded things up a little bit more with a revamp for their Hotlink bundles along with the Apple iPhone 7 on Maxis Zerolution.

This week we have quite a lot of reviews with the Meizu M3 Note review and the Samsung Galaxy J7 Prime review. We also compared the Huawei MediaPad M3 against some other tablets while going hands-on with the Sony RX100 IV. We also checked out the durability of the Xiaomi Mi Mix as well. More tech news and reviews are coming next week, so stay tuned to TechNave.com.