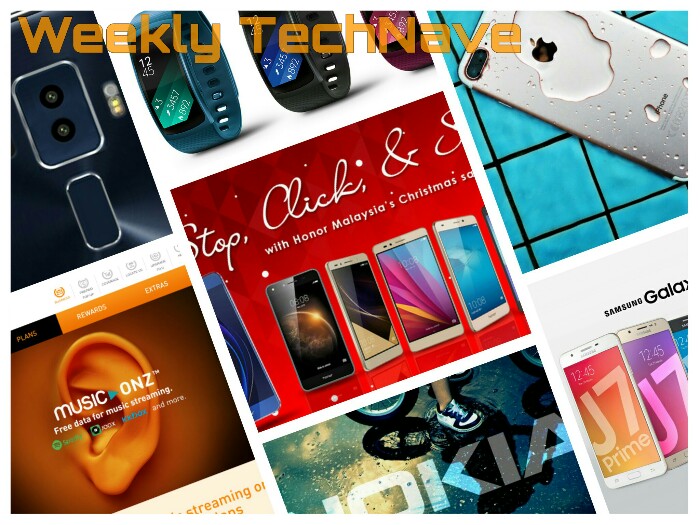 This weekly TechNave we've had quite a number of small but potent bits of news like Nokia smartphones coming in 2017, Huawei making a breakthrough in graphene-assisted heat resistant li-ion batteries and a well-known print magazine like Sports Illustrated actually using a smartphone for the image of its cover. Netflix now allows offline viewing and MediaTek announced new Helio X23 and X27 deca-core processors.

The announcements didn't stop there as TP-Link announced their Neffos Y5 smartphone, OPPO announced their A57 smartphone for China and Sony introduced a Final Fantasy XV Walkman, headphones and Bluetooth speakers. Meizu announced their Meizu Pro 6 Plus and Meizu X smartphones while the Samsung Gear S3 Frontier and Classic smartwatches are coming to Malaysia on 8 December 2016 for RM1399.

Opening up for every other Christmas gift minded manufacturer, Honor Malaysia launched their Honor Gala Christmas Promotion 2016 and Samsung with their Perfect 'J' guide for the Samsung Galaxy J Series (2016).

On the telco side, U Mobile announced free Music ONZ streaming and free deals every week on TERER THURSDAY. Maxis announced free data roaming for Expedia.com.my users and showed us how they are reaching out to empower Malaysia's youths via eKelas. Digi announced that they are sponsoring the first ESL One Dota 2 Malaysia qualifier as well as their continued efforts to keep Malaysian youth CyberSAFE.

Interesting rumours this week included the tech specs for the upcoming Samsung Galaxy C7 Pro. Also in the rumour mill was a contribution from a new Mr. Anonymous who informed us that the ASUS ZenFone 3 Zoom and ZenFone AR are coming soon as well.

As promised, we came out with the Apple iPhone 7 Plus review and a review on the Samsung Gear Fit 2. We also got some interesting audio and visual hands-on with the Huawei Media Pad M3 but more news, reviews and videos are coming next week so stay tuned to TechNave.com.