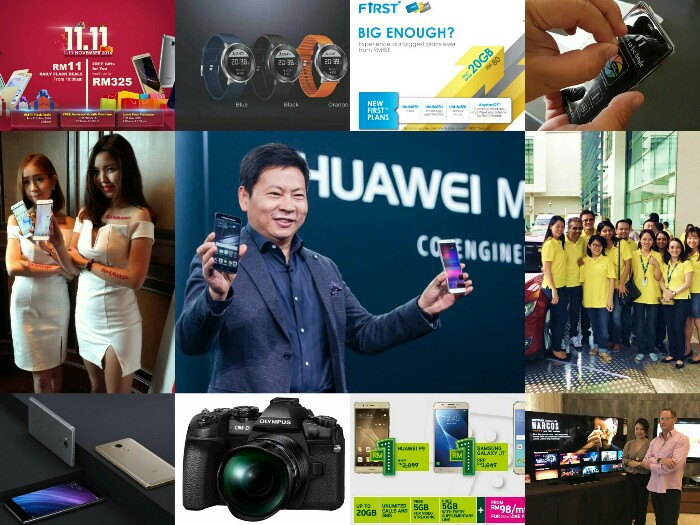 This week Huawei dominated the news with their latest and greatest Huawei Mate 9 and Porsche Design Huawei Mate 9 smartphones to go with a Huawei FIT smartwatch as well. Xiaomi managed to slip in their Redmi 4, Redmi 4A and Redmi 4 Prime smartphones while Olympus announced their OMD E-M1 Mark II DSLR will be going on sale in December 2016. The Meizu Pro 6S and Meizu M5 were officially announced while the Samsung w2017 flip phone officially arrived in China.

In local news, the Motorola Moto Z, Moto Z Play and the Moto Mods have officially come to Malaysia while SHARP Mobile Malaysia have returned with 2 new phones for the midrange. You can now get the Samsung Galaxy S7 edge in Blue Coral and Netflix and Double Vision will be bringing Malaysian TV series to the world of streaming video.

We also had the Dota 2 Mountain Dew Challenge happening for RM150000 while Call of Duty: Infinite Warfare got launched at midnight. That isn't the last of the gaming as the ROG Masters 2016 finals is happening on 12 November 2016 at KLCC. You can also say goodbye to Samsung Life as it will be integrated with the mySamsung app and LEAGOO appeared at the Premier League.

The ASUS ZenPower Pro powerbank is now in baby blue and rose pink while Digi started their first Digital Day to highlight the latest in technologies and digital platforms. Maxis are also offering new 4G devices for just RM1 with their MaxisONE Plans and Honor Malaysia kicked off their Honor Gala 2016 promotion for more deals and discounts on Honor products. Celcom upgraded their FiRST plans with a new addition of FiRST Gold Plus and Maxis built homes for Orang Asli families.

Reviews-wise we've been gathering up the devices this week so we only have the LEAGOO T1 unboxing and hands-on video and some hands-on videos with the SHARP Z2, SHARP M1 and the SHARP Robohon brand ambassador. Looking for a really small smartphone? Then maybe the Vphone S8 is the one for you as they say it is the world's smallest smartphone. In any case, stay tuned to TechNave.com as the LEAGOO T1 Plus and more comes next week.